When criminal barristers talk of having to diversify in order to survive, it’s generally assumed that they mean developing expertise in different areas of the law. The expectation isn’t that they would, say, start up a company that charges wannabe barristers £186 a pop to receive advice on ‘How to get a pupillage’. But that is what Tooks Chambers barristers Naeem Mian and Sultana Tafadar have done, enlisting their head of chambers, Michael Mansfield QC, to dish out the advice…

After being alerted yesterday on Twitter to a web page promoting an event called ‘HOW TO GET PUPILLAGE : APPLYING & INTERVIEWING’, featuring Mansfield and a host of big name barrister speakers, we did some research and found out some information about the company behind it, Osbourne McKenna Limited.

As you can see below, the directors of Osbourne McKenna – which was incorporated earlier this month – are Tooks duo Mian and Tafadar. 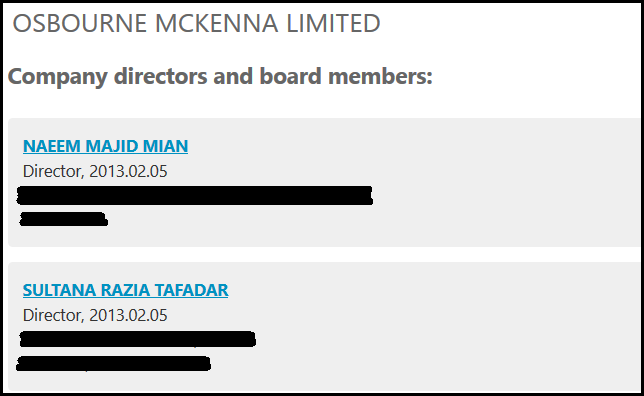 Tickets for the event cost £186.15, or £133.15 at the “early bird” rate. An additional advert for it on Tooks’ website promises, amongst other things, to give attendees “invaluable tips that will give you the competitive edge in the legal market place”, “find out how chambers carry out their selection procedure” and “see samples of successful and unsuccessful answers”. It adds: “Whilst this seminar cannot guarantee pupillage, it will certainly help to maximise your chances of success.”

Hall is chair of the Kalisher Trust which “helps talented students otherwise unable to come to the criminal Bar due to financial constraints”.

“The real story is that the Bar Professional Training Course (BPTC) costs students £16,000 a year. The students have a choice whether or not to come to our event, which has backing from Gray’s Inn.”

When asked whether the paid-for event could favour students from wealthy backgrounds, he responded:

“That is an old-fashioned and outdated argument. The event is priced to attract people who have paid in excess of £16,000 in BPTC fees, so in relative terms the sum we are charging doesn’t strike me as exorbitant.”

In a subsequent conversation, Mian added that a number of free tickets would be provided for students from poorer backgrounds. He was unable to confirm how many. “These have not been listed on the website for obvious reasons,” he explained.

Speaking this morning, Tafadar said: “We incur our own costs running the event. It is not possible to run the whole thing for free, but we have set aside some tickets for students from less wealthy backgrounds.”

News of the event follows the decision of the Bar Standards Board earlier this week to more than double the cost of the new Bar Course Application Test (BCAT), which was expected to be priced at £67 but will now cost £150.

Similar information to the type being offered by Osbourne McKenna Limited is available for free from some of the Inns of Court. For example, Inner Temple is offering its student members free pupillage application advice next Wednesday evening.