There is chaos at the UK Law Students Association (UKLSA) – whose patrons are Lord Neuberger and Lord Phillips – after some of the student executive quit en masse following a massive bust-up with the body’s governors. On Friday, the students posted this message on the UKLSA Facebook wall: 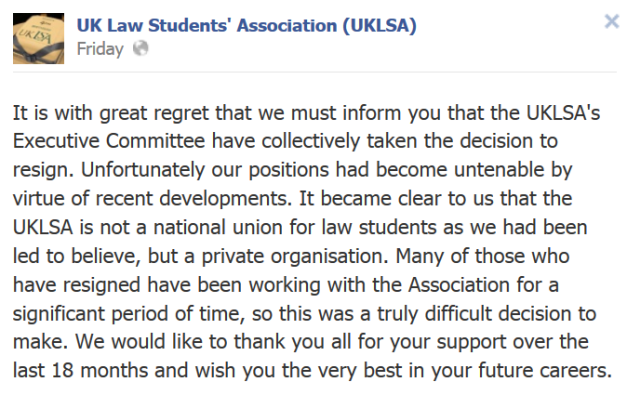 In an email leaked to Legal Cheek, the UKSLA governors have responded as follows:

“Your resignation comes as a relief because it released the Governors from the unpleasant task of having to dismiss some of you. Lately it has become clear that some of you were not working towards furthering the aims of the UKLSA, but for pursuing your own agenda. Behaviours such as dishonesty, refusal to meet with governors and to provide requested information are not acceptable.”

Over the weekend, tensions have risen after the departing UKLSA executive committee set up a rival association called the National Student Law Society (NSLS).

This has seen the governors threaten legal action over “a number of areas where the UKLSA identity and brand has been used to develop opportunities for NSLS”.

The departing executive committee members insist that this year’s UKLSA’s mooting competition – which hosts its final at the Supreme Court next month – will continue unaffected.