Westminster School has completed its controversial auction of work experience at the criminal Bar, with the 1-2 week placement going for a whopping £2,660 as bidding closed just after 5pm yesterday.

As you can see below, a frenzied series of last-minute bids saw the price of the lot shoot up dramatically from the £750 figure at which it had hovered since going on sale a fortnight ago. 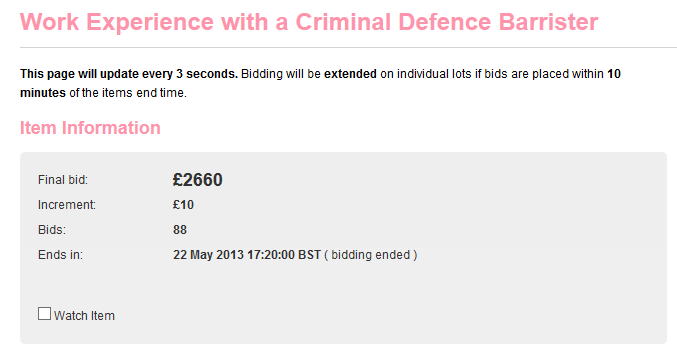 Initially billed by the top public school as a “mini-pupillage”, the highly sought-after barrister shadowing gig was re-branded “work experience” after the Bar Standards Board expressed concern at the idea of flogging something so official-sounding.

Following the re-branding, Westminster School also changed the web address of the original mini-pupillage auction lot to a new URL. There has been no suggestion, however, of any substantive change being made to the content of the placement.

News of the mini-pupillage auction was first broken, by Legal Cheek, on 8 May, with Westminster subsequently coming under pressure to drop what has been widely viewed as a worrying sign for social mobility at the Bar.

The school’s determination to follow through with the auction, despite condemnation of its actions by the Bar Council (see below), illustrates just how entrenched the old boys’ network is in the legal profession, and how toothless the regulators are in the face of it.

@legalcheek @lifeincustody regulation is a matter for @barstandards – we have said clearly work experience should not be bought and sold.

Alongside the sale of the legal work experience, internships in sectors including banking and architecture also featured in Westminster’s auction.