Bristol-based Guildhall Chambers has followed London set Charter Chambers in withdrawing its criminal pupillage for next year. It’s another indication that, despite the defiant public pronouncements about overcoming “Failing Grayling”, growing numbers at the criminal Bar reckon the game is up…

News of the withdrawal came via an email from the Pupillage Gateway system on Friday afternoon. 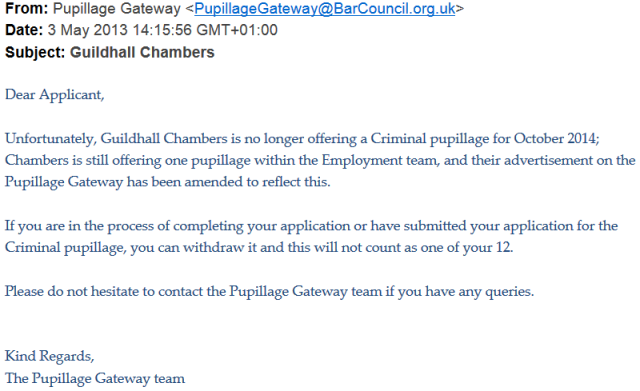 Guildhall’s move adds weight to the view expressed by Charter Chambers director Ian Payn last week that the legal aid reforms will “destroy the whole notion of pupillage” at the publicly-funded Bar.

If more chambers follow Guildhall and Charter in axing their criminal pupillages, record numbers of BPTC graduates could be left jobless over the next few years.

As you can see in the extract from the most recent Bar Barometer below, by the far the highest proportion of the approximately 450 pupillages offered each year are in crime. BPTC enrolments rose from 1,618 to 1,669 last year.

Guildhall Chambers will continue to offer its employment law pupillage.