The ‘work’ section of Saturday’s The Guardian featured a plea for help from a wannabe lawyer who is looking to find a training contract or a paralegal position. Said hopeful, who has a 2:2, has been working in temporary jobs in Brussels recently. He/she reckons that the nature of the work — “high-level policy” stuff, apparently — is intimidating potential employers who don’t understand its value, hence the trouble getting a foot on the legal ladder. Overlooking the enormous Desmond in the room, Guardian work advice expert Jeremy Bullmore lazily (or perhaps just uninformedly) agrees…

The advice letter, and response, in full: 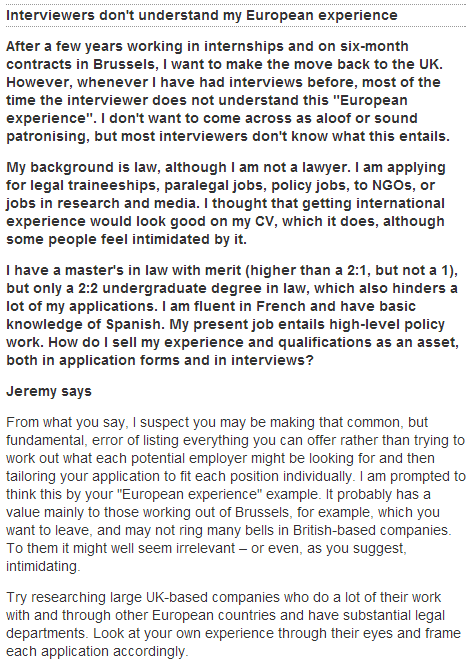 Bullmore’s response underlines just how out of touch the baby boomer generation can be when it comes to careers.

The correct approach for this wannabe lawyer is, of course, not to “try researching large UK-based companies”, but instead to face up to just how bad having a 2:2 is: i.e. it doesn’t just “hinder” applications to law firms, it gets them chucked in the bin immediately.

Then, having grasped this nettle, he/she needs to do something really eye-catching to make themselves stand out.

For the avoidance of doubt, doing something really eye-catching doesn’t mean, either, buying more education (an average masters result doesn’t come close to making up for a 2:2), or taking off abroad (and then boring everybody about it). People who make graduate recruitment decisions at decent law firms and chambers knows that these are easy options.

The best recent example I know of a law graduate with a 2:2 who has made himself into a real training contract contender is “ParalegalTony”, who, through a rigorous regime of tweeting and article writing, has become the Twitter voice of the too-many-law-graduates generation. In the process, he has landed paralegal jobs at Mishcon de Reya and now SJ Berwin while he completes his LPC part-time.

OK, so that’s still a long way from a training contract, but at least ParalegalTony can offer a prospective firm something extra in terms of his social media clout, contacts and evident desire to make up for whatever went wrong during his degree.

And if that doesn’t work? The reality is that with only so many ways to differentiate yourself in a still very tough job market, the best bet for many training contract-less law graduates may be to accept their fate, hustle for some paralegal work, then qualify as a legal executive (a process which now takes three years rather than five, making it a viable alternative to a TC). From that point, they can always proceed to qualify as a solicitor or barrister. The tricky part, for many, will be finding the necessary humility to divert from the elite paths upon which they have set their hearts.