A barrister has made public an email exchange with Chris Grayling in which the justice secretary claimed to have arranged to shadow two members of the Bar in July. Since it was published over the weekend, the claim has drawn scepticism, with barrister-turned-Labour MP Karl Turner offering to eat his wig if the legal work experience took place — tweeting this picture as he made his pledge… 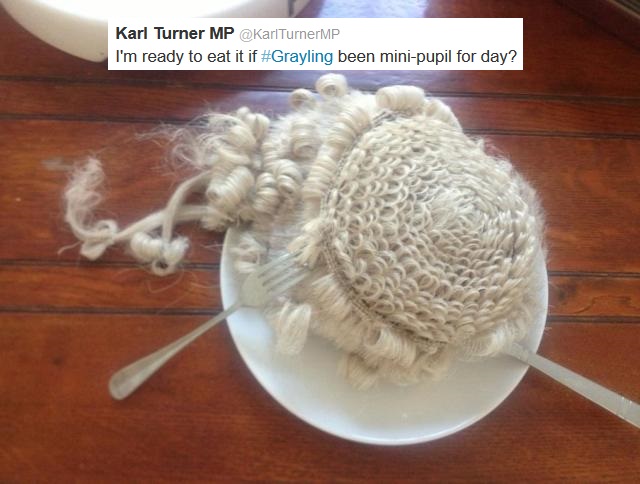 Here is a brief summary of the exchange between Grayling and 2 Pump Court barrister Emma Nash, as reported on the Criminal Bar Association Blog. Nash’s emails are considerably longer than Grayling’s, so we have summarised their gist, while publishing the justice secretary’s reported responses in full where we have them:

On 26 June Nash emailed Grayling to outline the details of a day of work shadowing she had offered him after bumping into him at the Houses of Parliament during a mass lobby of MPs against the government’s legal aid reform proposals.

Thanks for your message. You haven’t told me where you are…. Some of your group had come from Cornwall.

You have probably seen that I have signalled a couple of changes since we spoke. My diary is mad at the moment, but I am not ruling it out….

Sorry – I try to do my own emails, but am always a bit behind. I’m afraid you have been beaten to it. I will be in court with one of your colleagues in the next few days. I had the same offer twice on the same evening.

Thanks for the offer anyway. I can only say again that I have been listening carefully to what everyone has said in the last few weeks.

Nash then asked which barristers Grayling would be in court with. She also queried why Grayling had said on 4 July that he was not ruling out her offer if he had received another offer on the same night she had met him that he was planning to take up.

Grayling‘s response, as summarised by Nash, is as follows:

“His final reply dated 22 July was that he would not tell me the information I’d asked for, save that it was a member of the junior bar indeed “2 in fact”. Despite further prompting, there has been no response.”

The Criminal Bar Association says that it has requested the identity of the two barristers from the Ministry of Justice (MoJ), but that it hasn’t received a response.

As for the wig-eating pledge made by Turner, here is what he wrote on Twitter in full:

@TheCriminalBar @CrimBarrister If #Grayling turned up to sit behind counsel at anytime I shall publicly eat my wig.