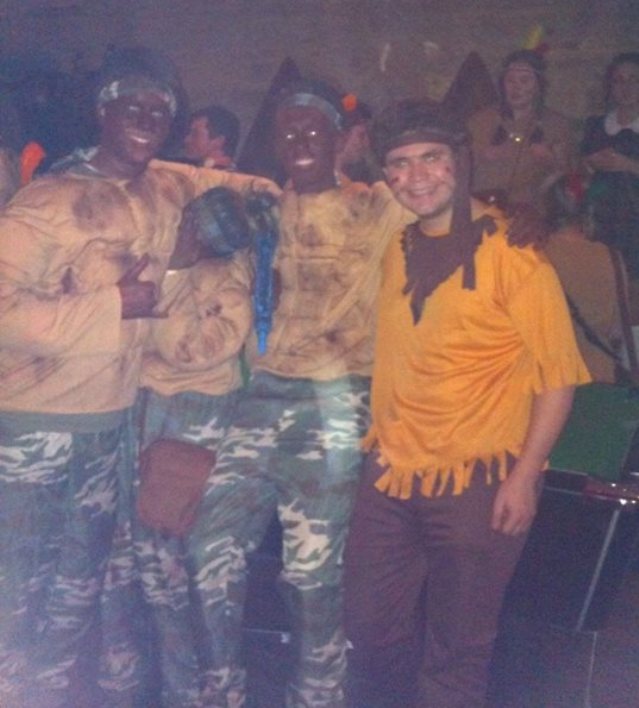 A group of law students are at the heart of a race row after they turned up to an Edinburgh University Law Society fancy dress pub crawl dressed as Somali pirates, complete with ‘blacked up’ faces.

Pictures of the students (one of which is above) began circulating on social media during the ‘around the world’-themed night out on Thursday, and continued to do the rounds over the weekend after student newspaper The Tab picked up the story.

Angry members of other societies at the university have condemned the students.

Third year Edinburgh social anthropology student Amie Robertson, who is a member of the Amnesty Society and the Tibet Society, said: “We ran into them in The Three Sisters bar. We tried to explain that their costumes were deeply offensive and racist. They didn’t even deny that, they just said, ‘Oh, it’s only for one night’. One of the members of the Vegetarian Society, who is of Pakistani descent, told them if they really thought it was okay, they would let her take a picture — and they did!”

Meanwhile, a student from the university’s Vegetarian Society said: “We don’t live on an equal playing field for people regardless of skin colour. Condemning actions like this is so important.”

Since then, Edinburgh University authorities have become involved, with rector Peter McColl describing the incident as “deeply regrettable” and an official university spokesperson stating that the law students’ unwise choice of fancy dress was being taken “very seriously”.

“As a society, we try to arrange our events with innovative and interesting themes leaving scope for attendees to use their imaginations. In no way was this theme intended to incite racism or cultural appropriation, and as a society, we are vehemently opposed to discrimination of any form.

“On behalf of the members of our society, we apologise unreservedly for any upset caused. In response to some of the costumes designed, in the future we will strive to ensure that any fancy dress events will actively discourage the use of any costumes that could be perceived as being offensive; if so, the wearers may be denied participation in said event. As a society, we respect our members’ right to freedom of expression; however, cultural insensitivity is intolerable and this is something that we are completely opposed to.”