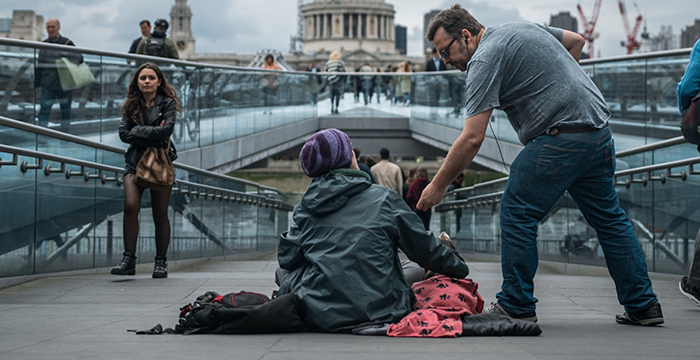 A human rights campaign group is taking the government to court to try to get legal aid for homeless people.

Public Spaces Protection Orders (PSPOs) allow councils to order people to stop any “activities [that] have had a detrimental effect on the quality of life of those in the locality”. PSPOs are civil orders, but breaching one is a criminal offence. They are one of several different powers that replaced ASBOs, the controversial Anti-Social Behaviour Orders scrapped in 2015.

Council bosses argue that measures like PSPOs don’t target rough sleeping, but rather anti-social behaviour (such as street drinking and aggressive begging) often linked to homelessness. Campaigners say that, in practice, the orders are criminalising rough sleeping and unfairly targeting vulnerable people. Stories about beggars been jailed for breaching civil orders have led to accusations that it is increasingly a crime to be poor in Britain. The homelessness charity Crisis says that legal actions against rough sleepers “should be used as a last resort”.

The Legal Aid Agency has refused to shell out for challenges to PSPOs, with Liberty saying they were told that such cases “could be financed by crowdfunding instead”. Solicitor Lara ten Caten said that “the Legal Aid Agency’s argument that people should rely on donations from the public to enforce their basic rights against local councils is wholly unreasonable.”

That said, Legal Cheek understands that the person represented by Liberty in the case is not actually homeless herself, but a “concerned local” who wants to challenge her council’s clampdown. But Liberty says that the case is about making legal aid available for cases against PSPOs, whether the person applying for it is directly affected or not.

The group has instructed Jamie Burton and Angela Patrick of Doughty Street to argue that “locals are directly affected by any measures which put them at risk of criminalisation, that the relevant legislation does permit the Agency to fund PSPO cases, and that the ability to challenge PSPOs is of great public importance.”

The Legal Aid Agency confirmed that challenges to PSPOs do not currently qualify for legal aid unless the applicant can get exceptional case funding.

Even less subtle legal powers are available to the authorities. Begging has been a criminal offence for centuries under the Vagrancy Act 1824. In 2016, over 2,000 people were prosecuted under section 3 of the Act, which says that “every person wandering abroad, or placing himself or herself in any public place, street, highway, court, or passage, to beg or gather alms, or causing or procuring or encouraging any child or children so to do; shall be deemed an idle and disorderly person.”

Another 600 people were prosecuted under section 4, which targets rough sleeping (“every person wandering abroad and lodging in any barn or outhouse, or in any deserted or unoccupied building, or in the open air, or under a tent, or in any cart or waggon… shall be deemed a rogue and vagabond”).