‘Remember remember the 5th of November, gunpowder treason and plot’ 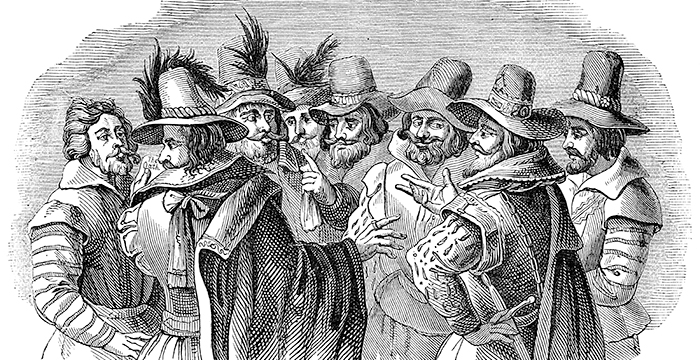 On this date in 1605, a clerk wrote a note in the margins of the House of Commons journal:

“This last night the Upper House of parliament was searched by Sir Tho. Knevett; and one Johnson, servant to Mr Thomas Percye, was there apprehended; who had placed 36 barrels of gunpowder in the vault under the house, with a purpose to blow King and the whole company, when they should there assemble. Afterwards divers other gentlemen were discovered to be of the plot.”

The man arrested gave his name as the totally plausible “John Johnson”, but he was really Guy Fawkes, the most notorious of the Catholic conspirators behind the ‘Gunpowder Plot’ commemorated on 5 November every year.

Fawkes and seven co-conspirators were tried for high treason in January 1606, less than three months later (today the crown court average is almost 18 months from offence to verdict). The trial only lasted one day, and modern prosecutors may marvel at the self-restraint of Sir Edward Coke, whose closing remarks were delivered “in respect of the time (for it grew now dark) very briefly”.

To celebrate Guy Fawkes Night, we’ve dug up the record of this trial and embedded it below. An easier to read transcript is available here.

It opens with the indictment that the plotters “traitorously amongst themselves did conclude and agree, with gunpowder, as it were with one blast, suddenly, traitorously and barbarously to blow up and tear in pieces our said sovereign Lord the King”, and ends on the verdict of guilty.

The sentencing powers available to the judges were somewhat more robust in those days: Fawkes & co were hung, drawn and quartered a few days later.

Read the court record in full below:

Sign up to the Legal Cheek Newsletter
Guy Fawkes

Is it just me, or is this website getting less interesting every day….?

Comments are closed on the RPC/Hardwicke article, but I just wanted to say that RPC is a great firm to work at. The pay is poor, but that is the only bad thing I have to say about working here. Great work, great colleagues, great clients. Really strong 9/10 stuff.

Then why do they pay so little?

Having to commute to a flatshare in Zone 6 does take time I suppose.

Commuting to a flatshare in zone 6 does take time.

There is a zone 6? Christ! I really need a top reason to go outside of the Circle line.

I live close to the office

Just because it’s still in London doesn’t make it close.

I live in Zone 1. I live very close to the office.

Why are you here giving your firm a colonoscopy with your nose?

C’mon this is Legal Cheek. All we want to know is how much Edward Coke trainees were on, and what are the perks?

I probably got through about 50g as a trainee at DLA