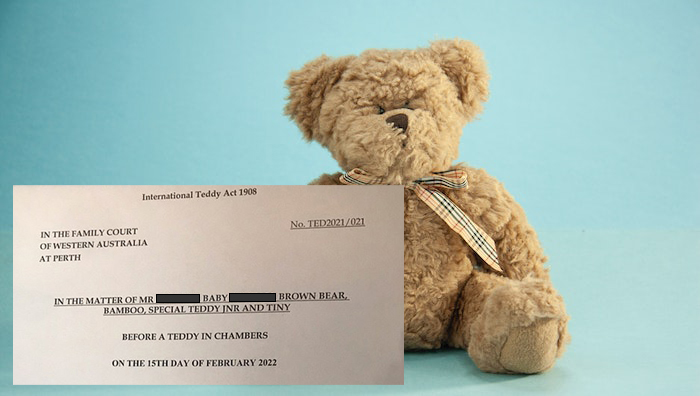 An Aussie judge has approved a seven-year-old boy’s request to adopt a “hug” of teddy bears.

The young boy had written to the Family Court of Western Australia, asking if he could adopt his six teddies.

The judge responded with a heartwarming letter saying that his request had been granted under the fictitious “International Teddy Act of 1908”.

“Before a Teddy in chambers.

“Application having been made under the International Teddy Act 1908 for an adoption order in relation to a hug of teddies known as Mr D, Baby D, Brown Bear, Bamboo, Special Teddy Jnr and Tiny who reside in … Western Australia.”

“It is ordered that [the teddies] be adopted by [the boy] to be treated lovingly as child and teddies.”

The court document had been shared online by a relative of the boy who said he was not sure how many similar requests the court receives but “this seemed to go above and beyond. Thank you.”

It attracted thousands of likes and hundreds of messages.

The latest comments from across Legal Cheek
Australia Judges

There needs to be a full public inquiry if tax payers money is getting wasted on stuff like this.

Don’t be a misery

How long do you think that would have taken to type up? 5 minutes? Another 10 seconds to put in an envelope?
Good grief! If this puts a smile on the young boy’s face, has given many of us a little enjoyment, it was worth it. Scrooge!

how much would a full public inquiry cost to see if tax payers money is getting wasted on stuff like this?

Whatever it costs, if it stops this sort of vast government waste of resources ever happening again then it’s money well spent. Better that than realising a few years down the line that double that amount has been spent on unnecessary rubbish like this again.

get back to the Daily Mail where misery guts comments like this belong.

This will have taken seconds to write and may even have been done in the judges own time, of which they have little. Very odd that you would be happy to have tax payers money spent on a public inquiry costing millions but argue it would be wrong to have spent a few dollers on an act of humorous kindness. A little narrow minded don’t you think.

Whatever it costs, if it stops this sort of vast government waste of resources ever happening again then it’s money well spent. Better that than realising a few years down the line that double that amount has been spent on unnecessary rubbish like this again.

Didn’t a barrister jump in a river to save a kid’s teddy a few years ago? What is it about lawyers and teddies?

And that was a potential minefield. Imagine if he had been injured and an ambulance and hospital resources spent on him rather than someone not doing something reckless and selfish to get on the front cover of the local rag.

Based on your comments, Anon,
I’m guessing that you have some Ted Issues.

Were you of the generation of little boys who were forced to put teddy in the bin/charity shop/blender as a rite of passage before you went off to Prep School?

1. Very presumptuous and in fact sexist to assume I’m male. I don’t blame you though it’s the fault of the patriarchy.

2. Your ad hominem reply does not explain why you approve of valuable public resources being spent unnecessarily.

The primary purpose of the family courts in all Australian jurisdictions is to act in a way that protects the best interests of children. The judge has done exactly that in this matter. The family court is such a nightmarish place for litigants, lawyers and jurists; it must have been a lovely thing to make an order which made everyone happy. Perfectly acceptable use of public funds (if, in fact, any public funds were used).

I hope you’re griping about ScoMo using public funds for self-promotion and torturing classic hits with his ukelele. That’s worth stopping.

The boy concerned was going through his own adoption process, if a 5 min reply to him in relation to his teddies made that process less frightening or stressful, it was time and money well spent. This is a human face to the law.

🎵Mama… just built a bear… got some stuffing, fur and thread… now he’s sitting on my bed🎶

May I suggest a trip to Build a Bear Workshop as a first step?

You’re a big boy now and teddy went into the dustbin to prove it.

Now put these Drynites on!

I can confirm that Anon is now in Teddy Therapy and is recovering.