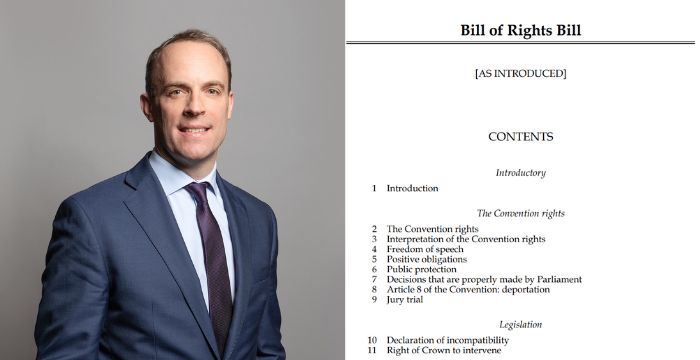 The government’s planned reforms of the 1998 Human Rights Act have been shelved whilst “the most effective means to deliver objectives through our legislative agenda” is being mulled over by the new Truss administration.

Reforming the Human Rights Act was a pet project of the former Justice Secretary and ex-Linklaters trainee Dominic Raab which came to fruition during his stint as Lord Chancellor when he proposed the Bill of Rights Bill. The Bill would have repealed the Human Rights Act 1998 and introduced a new permission stage for human rights challenges.

The objective of the Bill was, according to the former Justice Secretary’s statement in Parliament, to “reinforce quintessential UK rights”. The proposed legislation had received a strong response from several prominent lawyers and MPs including Raab’s predecessor Robert Buckland who indicated that the Bill needed to be reviewed.

In July, Lord Pannick QC told the Joint Committee on Human Rights: “If this Bill were being sold in the shops the Lord Chancellor, in my view, would be at risk of prosecution for false or deceptive advertising.”

On Tuesday, Raab was sacked from his position at Lord Chancellor and Justice Secretary by Liz Truss with the PM’s new administration being quick scrap the former Linklaters’ man’s plans.

On the news that the Bill had been shelved, Law Society President Stephanie Boyce took to Twitter to share her relief. She wrote: “The Bill needs a complete rethink, the current draft represents a lurch backwards for British justice which would disempower people in Britain while giving the state more unfettered authority.”

Prominent legal commentator David Allen-Green tweeted: “The Human Rights Act 1998 is still there. And @DominicRaab is not”. Allen-Green then stated that the ex-Justice Sec’s account had blocked his Twitter account (@law_and_policy) in response to the Tweet.

In the comments the best-selling author the Secret Barrister noted that he too was blocked by Raab’s Twitter account. The Secret Barrister has been critical of the way Raab has handled tensions between the Ministry of Justice and criminal barristers with a recent escalation culminating in the launch of an indefinite, uninterrupted strike on 5 September by Criminal Bar Association (CBA).

Raab’s replacement Brandon Lewis is set to meet with the CBA next. Lewis announced on Twitter: “Hundreds more victims seeing justice delayed – these statistics show the impact of the Bar strike. I’ll be meeting @thebarcouncil @TheLawSociety @TheCriminalBar to emphasise the need to get back to work and get justice moving again.”

Kirsty Brimelow, Chair of the CBA, commented: “I look forward to meeting the Lord Chancellor and hope this introductory meeting urgently will be followed by opening of negotiations to resolve the criminal barristers’ action of stopping work on cases as a result of the crisis in the CJS [Criminal Justice System]”

Raab has to be one of the most useless politicians to have ever served. Flopped in his role as brexit secretary, foreign secretary and justice secretary!

One cliché deserves another

I had it on good authority that the shelving of the ECHR was to have been a prelude to a referendum on the death penalty.

Fortunately, this can’t happen now that the plan has been shelved.

Not a chance this is true – but either way, glad to have got rid.

The only people unhappy about the new Bill of Rights were left wingers who are happy that the judges have a mission creep that allows them to push their own predominantly left wing agenda.

Take R (SG) v DWP. The 2015 Conservative manifesto lowered benefits in certain circumstances. The quantum of benefits for a particular year were approved in an Act of Parliament, but a challenge was then brought on human rights grounds. In the most disgraceful act, Lady Hale (thankfully in the dissenting minority) held that it was gender discrimination because most benefits claimants are women.

This was a manifesto commitment, approved by Parliament, yet a senior judge wanted to strike it down using the HRA. It’s intellectually dishonest to claim that the HRA isn’t undemocratic just because it aligns with your particular views.

You clearly dont know what you are talking about, do you? I fully intend an ad hominem attack here because you dont even understand what the HRA empowers judges to do, nor what Lady Hale’s judgement was, nor the rationale given by the majority as phrased by Lord Reed.

Lady Hale wasnt trying to ‘strike down’ the Act of Parliament. What the hell are you talking about? Under the HRA, they burdened with a duty to interpret all subsequent legislation in light of convention rights. Where an Act is explicit in breaching such rights, they may issue a Declaration of Incompatibility. This is what Lady Hale was trying to do – not ‘overturn’ the democratic will of Parliament. This is why the HRA is suited to our unwritten constitution: it works on the political constitution of this country by allowing judges to highlight with a formal declaration when an act flagrantly violates rights protected in the HRA while still respecting the legal one.

Anyone with any measure of Administrative Law knowledge should know this. If you read the judgement, you would see that the scheme itself would have a disproportionate impact on those with many kids – that disproportionately being single mothers. Using the framework of assessment given by the HRA, Lady Hale made a relevant, and reasonable, judgement.

The courts have adopted proportionality as the appropriate standard of review under the HRA (see Daly, ProLife Alliance).

In deciding whether to issue a DoI, courts may consider whether:
(i) Whether its objective is sufficiently important to justify the limitation of a fundamental right;
(ii) Whether it is rationally connected to the objective;
(iii) Whether a less intrusive measure could have been used; and
(iv) Whether, having regard to these matters and to the severity of the consequences, a fair balance has been struck between the rights of the individual and the interests of the community.
See de Freitas [1999] 1 AC 69 line of cases and summary in Bank Mellat No.2 [2013]

In the case you have quoted, note Lord Reed’s summary of this position: “giving due weight to the assessment of the Government and Parliament, I am not persuaded that the Regulations are incompatible with article 14 [sexism stuff]”. Also salient was the no alternative / less intrusive measure could have been used to secure governments objectives.

TLDR:
The point I’m trying to make is that the treatment of the HRA in the courts is much more complex, well reasoned, and rigorous that you give it credit for. It is far too simplistic to pretend that any talk of ‘rights’ and the HRA constitutes politics by other means.

You CANT STRIKE DOWN AN ACT OF PARLIAMENT dingus.

Something awful will be replaced by something worse.