The rules are tricky for lawyers even to find, let alone understand 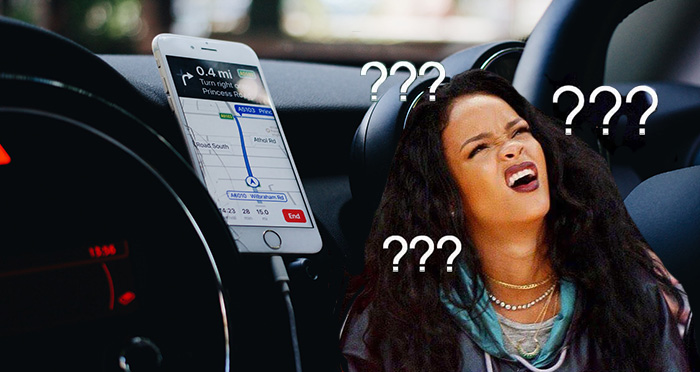 A high-profile barrister has branded the law on driving while using a mobile phone a “confusing” and “incomprehensible” mess.

Matthew Scott took to his popular Barrister Blogger website to argue that the “nonsensical” rules essentially make it illegal to use a phone as a satnav “unless the app is turned on without holding the phone in your hand”.

Law students grappling with the finer points of proprietary estoppel may sneer, but it turns out that road traffic law has its interpretative subtleties too. For example, Scott says:

“What about if, before he starts driving, the driver holds the phone in his hand, turns on the satnav app, and then places it on the passenger seat in order to listen to the navigation directions? There is an argument that because he has held the phone ‘at some point during the course of… performing [an] interactive communication function’ he is to be treated as using a hand-held mobile phone while driving.”

Driving while using a handheld phone or device is an offence under regulations introduced in 2003. More recently, Transport Secretary Chris Grayling doubled the penalty points and fine that come with a conviction for use of a phone behind the wheel.

The Crown Prosecution Service (CPS), though, concedes that because of the way the rules are drafted “there has been some debate about what use means”.

Scott’s post was sparked by a recent column by Spectator editor Fraser Nelson. The Scottish journalist — who was recently schooled by legal Twitter when he waded into the law on Brexit — complained of the “legal fog” that descended when he found himself tried for the motoring offence in the mags.

Nelson, despite never doing a law degree, managed to drop some big legal names in his column, invoking Lord Diplock and former Supreme Court justice Lord Bingham in demanding that the law be “accessible, intelligible, clear and predictable”. The Telegraph has taken up the cause, with a flurry of recent articles complaining about confusing mobile phone rules.

Even Scott was forced to concede that “for an unrepresented person without any experience of navigating through the shifting sand of amended statutes and statutory instruments… it is pretty difficult” to track down the regulation in question — let alone understand it.

It’s not secret but it doesn’t (needless to say) come up on https://t.co/Ojrwy1R3OV unless you know the SI number. It does come high up on a google search though.

Mobile phones aren’t the only device caught by outdated legislation.

Hoverboards — all the rage a couple of Christmases ago despite their unfortunate tendency to catch fire — are banned from the roads by virtue of the Highway Act 1835. The High Court decided a few years ago that a similar device, the Segway, came within the scope of the pre-Victorian legislation, holding that “the fact that parliament in 1835 could not have had the Segway in mind is true but irrelevant”.