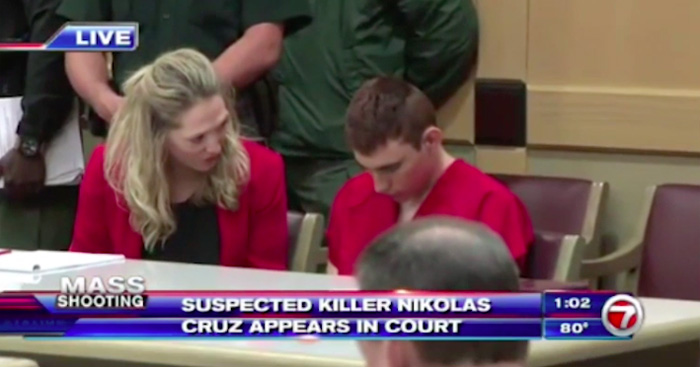 A British junior barrister who started a death penalty internship in the United States just weeks ago is now involved in a case concerning one of the country’s worst school shootings of recent times, Legal Cheek can reveal.

Nineteen-year-old Cruz is accused of killing 17 people after opening fire at Stoneman Douglas High School, where he was once a pupil, on Valentine’s Day. This is understood to be the deadliest school shooting since 26 people were killed at Connecticut school Sandy Hook in 2012.

Woodward — who was called to the bar in 2006 and is a former pupil of 187 Fleet Street — only started volunteering in the US last month after receiving funding from legal charities Amicus and The Kalisher Trust, according to her LinkedIn profile.

Yesterday, Woodward (pictured left) sat alongside Cruz for a brief procedural hearing in Fort Lauderdale. Judge Elizabeth Scherer upheld a decision made by another court to keep defence documents sealed from the public. Cruz is being represented by lawyer Melissa McNeill, the assistant public defender in the homicide division of Broward County’s Public Defenders.

Woodward’s chambers profile reveals she has a “strong commitment to representing defendants vulnerable through age, mental health and other incapacity”. Woodard has completed secondments at international outfit Kingsley Napley, the Serious Fraud Office and the Financial Conduct Authority.

Legal Cheek has contacted Woodward and her chambers for comment.