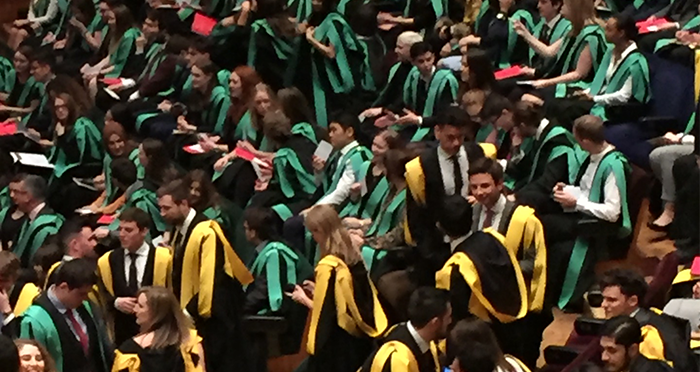 Data obtained by Legal Cheek shows that in 2012/13 there were 42,515 UK domiciled full-time undergrads studying law who were from a known and applicable school type (i.e. either privately or state educated). Nine percent of these (3,645) were from a privately-funded school.

The latest available Higher Education Statistics Authority (HESA) data, from 2016/17, shows at that point the number of law students was 43,945, and 3,415 were privately educated. That’s a drop of 230 students or one percent point.

Over the same time period a similar trend is experienced in wider student populations, HESA data shows. In 2012/13, 978,625 state-schooled students were enrolled in UK universities, studying a wide range of subjects, versus 109,755 privately-educated students — that’s 90% and 10% respectively.

With 7% of the general population having attended a private school, university statistics both in law and otherwise paint a fairly representative picture. However, the legal profession’s social mobility problem continues.

The solicitors’ profession, bar and judiciary have long been seen as bastions of privately-educated privilege, taking on a far higher percentage of independently-schooled law graduates than come through the university system. And, when they get there, they stand to earn more money than their state-schooled peers, new data shows.

Because of this, there are plenty of diversity initiatives hoping to hold the key to law’s social mobility problem, these including: the Sutton Trust, Big Voice London and PRIME.

Sign up to the Legal Cheek Newsletter
Social mobility Students