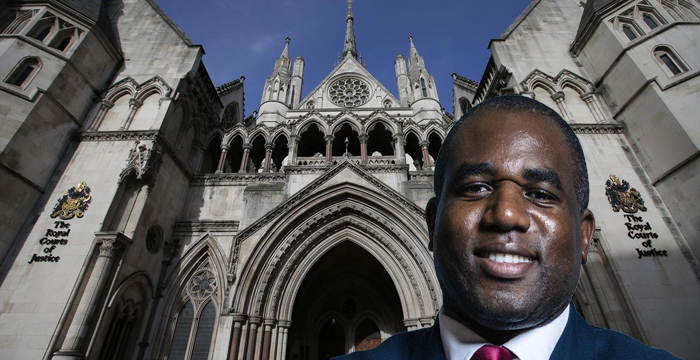 David Lammy, the barrister turned MP for Tottenham, believes he won’t see a Lord Chief Justice from a black minority ethnic (BME) background in his lifetime, but is hopeful the Supreme Court may gain a non-white justice in the same time period.

In an impassioned talk about race in the justice system given in the Caledonian Club near Hyde Park yesterday, Lammy expressed resentment at what he calls the profession’s interpretation of “merit” as “white, male and middle class”. He encouraged the use of judicial targets, however, he didn’t go as far as to push for quotas, as these are “problematic”.

The Lord Chief Justice is the formal head of the judiciary of England and Wales and, in its 150-year history, has never been held by a woman nor a BME man. Though there had been speculation that 2017 would see a female take the post, it was Ian Burnett who was eventually promoted to the role, in October.

Lammy — who some believe is a contender to be the next leader of the Labour Party — is more hopeful about better BME representation at the Supreme Court. Though the country’s most important bench has had a gender diversity spruce since the appointment of Lady Black and the promotion to presidency of Lady Hale, it’s still all-white. 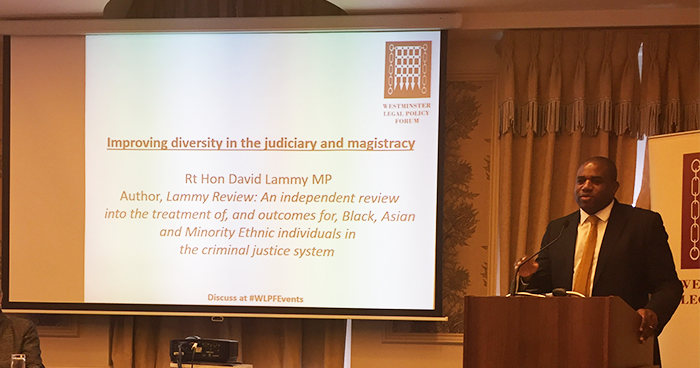 Lammy was called to the bar in 1994, after becoming the first black Briton to study at Harvard (where he did a masters degree). After arriving late to the Westminster Legal Policy Forum event because of overrunning parliamentary business, he said:

On why this was, Lammy said the appointments commission was unable to tell him why BME lawyers’ applications aren’t successful (“if it looks like a duck, and quacks like a duck…” he said). Sometimes, he continued, BME lawyers stop applying for senior judicial positions because the constant rejection is “embarrassing”.

The ethnic diversity of the country’s judiciary is an important issue, particularly in criminal law.

The low percentage of BME lawyers compared to clients has created a “trust deficit”, SOAS graduate Lammy said. Having been commissioned by then Lord Chancellor Michael Gove to review the justice system (“on the understanding I wouldn’t be leaving the Labour Party and joining the Conservatives!” he laughed), Lammy recommended the government sets “a clear, national target to achieve a representative judiciary and magistracy by 2025”. However, the government rejected this proposal.

More generally, the importance of diversity was a recurring theme in yesterday’s seminar. The first keynote speaker, Herbert Smith Freehills employment lawyer and Legal Service Board member Jemima Coleman, described diversity as “a public interest issue, and an interest of justice issue”.

At the Westminster Legal Policy Forum Keynote Seminar today – employment lawyer and @LSB_EngandWal member Jemima Coleman tells audience there are a number of diversity issues that cut across the sector, including: mental health and disability pic.twitter.com/SPGvfeSxas

Perhaps the most interesting debate explored where the diversity problem in the legal profession truly lies. Catherine Baksi, a barrister turned freelance journalist, focused on the problems of access to the profession.

She highlighted the extreme costs required to enter the profession (for example, it’s estimated training to be a barrister will set you back £127,000 when you add up course fees and associated living costs). The “overemphasis” on securing a law degree, which she thinks you don’t need to be able to be a good lawyer, means “strives made by the profession in diversity are being pushed back because of the cost of university”.

The hope is that upcoming reforms to legal education in both the solicitors’ profession and at the bar will help ease this. But Baksi advocated a more radical change: a Chartered Institute of Legal Executive (CILEx)-style route into law, which shifts the focus away from university education towards on-the-job training. This would be cheaper and create a more diverse profession.

Stanford-educated Andrew Fairbairn — who runs a social mobility programme in London called SEO — thinks effort should be focused not on access to the profession, but retention.

“There are so many diverse candidates getting multiple [training contract] offers from multiple firms,” Fairbairn noted, “and that piece of the puzzle has a lot of groups behind it”. There is less momentum behind initiatives looking at what happens to more diverse candidates once they’re through the door; are they being given the opportunity to rise? “The evolution of the discussion should be about: retention, retention, retention,” he finished.