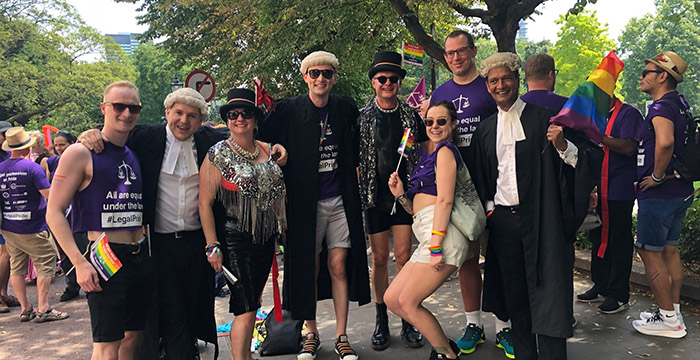 Lawyers lined the streets of London this weekend to march for lesbian, gay, bisexual, transgender and intersex (LGBTI) rights at this year’s Pride in London parade.

Around 30,000 people — including Bar Council chair Andrew Walker QC and Law Society president Christina Blacklaws — took part in the parade, the biggest of its kind in the UK. Members of the legal profession have been sharing their social media snaps using the hashtag #legalpride and we’ve rounded up some of the very best.

The bar was out in force as some barristers braved the sweltering heat and took to the streets in full court dress:

It was high fives all round as the lawyers made their way through the cheering crowds:

I hope they don't think they'll get this much admiration next time they go to court…! #managingexpectations Fantastic to spend the day with #legalpride and @FreeBarLGBT friends pic.twitter.com/Raobh8r7gr

There were rainbow-coloured accessories galore, including these rather funky sunglasses:

Happy #LondonPride from me and my Equality Act 2010 necklace ?Delighted to be working in a sector and a city where I can live openly and proudly ✨#LegalPride pic.twitter.com/O2MzbqSPJN

And you can never have enough wristbands:

While ‘all are equal under the law’ badges were dished out as freebies:

#PrideMatters each and every day that we live our lives true to ourselves and celebrate the LGBT+ community’s diversity, achievements
and progress together #WhyPrideMattersToMe #LegalPride#Pride pic.twitter.com/yWW7PDIN5b

The Inns of Court got in on the action too.

Middle Temple are excited for#Pride2018 tomorrow! The Pride flag is flying high over Hall in loving memory of our former Master Treasurer, Sir Paul Jenkins, who would have been very proud! #Pride pic.twitter.com/SVCoGAWXRs

We hoped you all enjoyed London Pride 2018 as much as we did!