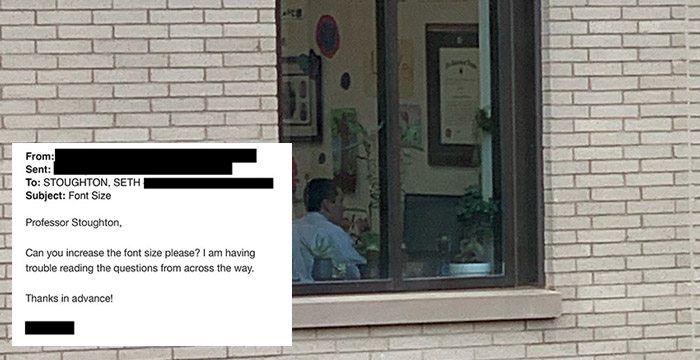 Being a law student these days is a pretty stressful business. Essays, exams and vac schemes (we could go on) can leave even the most determined of aspiring lawyers questioning their life choices.

So with that in mind, it appears some students are willing to go to extreme lengths in an attempt to make life just that little bit easier. Take this next wannabe lawyer’s actions as a case in point.

Seth Stoughton, an associate professor at the University of South Carolina, took to Twitter earlier this week to reveal he’d been in the middle of drafting a criminal law paper when he received an email from one of his students. The short note asked if Stoughton, who was sat at his office desk at the time, would be willing to increase the font size on his computer, as the student was struggling to read the questions from “across the way”.

Yes, that’s right, the eagle-eyed law student had spotted the police officer turned academic working on the exam while revising in a building adjacent to Stoughton’s office. For the avoidance of any doubt, the student went as far as attaching a snap of the law prof at his desk.

Speaking to Legal Cheek, Stoughton said he had received the email from one of his first-year students, roughly 90 minutes before they were due to sit the exam. Legal Cheek understands Stoughton politely rejected the student’s request. Nice try, though!

Sign up to the Legal Cheek Hub
Students US