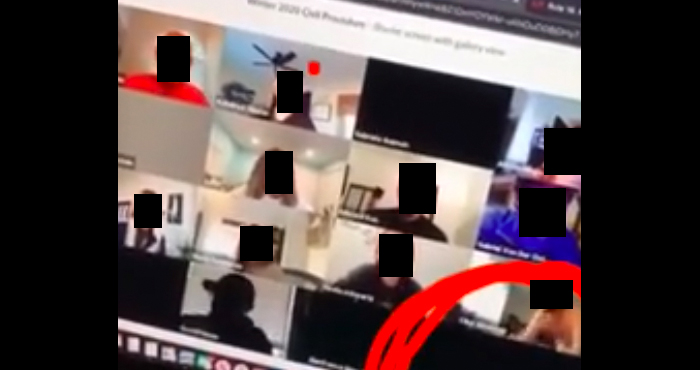 The perils of working from home amid the COVID-19 lockdown have been exposed (quite literally) after a legal video call was interrupted by a colleague who unwittingly flashed his co-workers.

‘Don’t be a ‘Ben’ while working from home — Zoom meeting gone wrong’ (embedded below), has gone viral on social media after ‘Ben’ appeared totally starkers on screen.

The short clip shows a number of participants engaged in a Zoom conference call chatting mindlessly about what appears to be civil procedure when a topless ‘Ben’, seen in the bottom right hand corner, rises and begins to wander around in the nude.

Gasps of shock, facepalms and nervous laughter resonate from the man’s colleagues, who are assumed to be legal workers (the LexisNexis logo appears to be visible in one of the tabs).

One colleague exclaims “Oh my god!”, while the group call leader changes tack, stating: “…let’s make sure everybody has clothes on!” Another colleague shouts “Ben, your video is on!” but ‘Ben’ is apparently oblivious to the stir his ‘Big Ben’ has caused.

Don’t be a ‘Ben’ while working from home, and check out our guide to Zoom etiquette.