‘That’s definitely not part of our brand’, says firm spokesperson 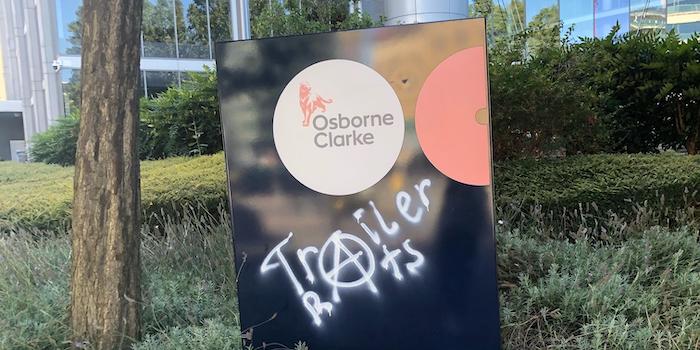 Osborne Clarke appears to have been targeted by spray can-wielding vandals.

A snap sent to Legal Cheek shows what looks like the words “Trailer Rats” daubed across signage located outside the international firm’s office in Bristol. The graffiti also appears to contain a circled “A” which is perhaps best-known as the present-day symbol for anarchy.

Having brought the tag to the firm’s attention, a spokesperson confirmed it’s “definitely not part of our brand” and “our fantastic cleaners have been despatched” to remove it.

This isn’t the first time law firms, or their lawyers, have been targeted in this manner. In 2017, we reported that someone had scrawled “FUCK LAWYERS!” at the main entrance of Hill Dickinson‘s HQ in Liverpool.

Sign up to the Legal Cheek Hub
Osborne Clarke Solicitors

What does trailer rats mean?

I hate lawyers too.

That's quite a cool tag

Well, we can’t be sure whether the Hill Dickinson one is a condemnation, or an associate’s Tinder profile.

You should see lawyers as your HERO! We work hard all the time most of us eating lunch at our desks so we can act in the best interests of our clients. The law is a minefield and only a trained person can deliver results.

You get lunch breaks?! How the other half lives ey