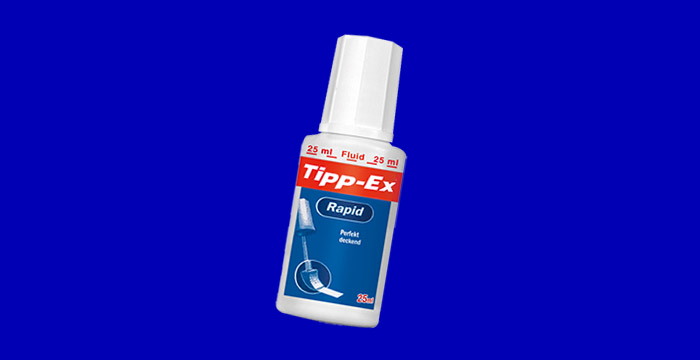 A property solicitor who used Tipp-Ex to alter important paperwork has been struck off the roll.

Nicholas St John Gething, who worked at the Cheam office of Howell Jones at the time of the misconduct, described the move as a “quick fix” which he now realised was wrong.

The tribunal heard how the solicitor was working on two property transactions and had 21 days to register both a fixed and floating charge with Companies House.

Unfortunately, Gething missed the deadline because the accompanying paperwork had been filled out incorrectly, and by the time it was returned to him by the Registrar of Companies, the 21 day time limit had elapsed.

The solicitor submitted further copies of the charges which according to this week’s ruling, “did not bear their original date, but which had instead been re-dated to make it appear that they were being delivered within the time limit”.

It later emerged that Gething had used Tipp-Ex to make it appear that the application had been submitted within the 21 days. Neither the mortgage lender or purchaser had given their consent to the re-dating of the charge, according to the ruling.

During the hearing, Gething accepted that he had altered the dates on the legal charges and on a floating charge. He also accepted, on reflection, that this was “deliberately misleading and dishonest”.

The solicitor said he was “embarrassed for having got himself into this position, and that he had thought what he had done was right at the time”. He described his actions as a “quick fix” that “ultimately had not resolved the matter”.

But the tribunal noted that while Gething “had shown some degree of insight during the hearing, he still did not appear to grasp the gravity of his actions.”

It continued: “He did not seem to understand that it was inherently unacceptable to change the date on legal charges being filed on behalf of clients, and then present those charges to third parties as authentic copies of the originals, when they were not. The matter was further exacerbated by the fact that the mortgage lender and the clients were unaware of what had been done.”

The tribunal noted that Gething had acted “dishonestly” on two occasions, albeit within a relatively short period of time, and that his conducted had been deliberate and had been repeated. It also said the solicitor ought reasonably to have known that his conduct was in material breach of his obligations to protect the public and the reputation of the legal profession.

Gething was struck off and ordered to pay £5,700 in costs.

I hate that limit… especially as my colleague missed it twice on one occasion, so I got the third signing meeting and apology shift…

Ffs hardly a big deal he did what he thought was best in the interest of his client. No harm was caused to anyone.

The SRA can easily make an example out of dishonesty without needing to end someone’s career. Far too trigger happy.

These string of SRA decisions leave me feeling scared of mistakes and unsupported.

You really don’t need to worry.

These people aren’t being disciplined for “mistakes”.

They are being disciplined for dishonestly trying to cover up a mistake.

Mistakes should be avoided if possible, but everyone makes them sometimes. What gets people into trouble is not (for instance) missing a hearing or missing a Companies House deadline. The disciplinary action arises when a lawyer (for instance) misses a hearing *and then* removes the notice of hearing from the file and bins it, so that anyone who inspects the file will be mislead into thinking that it was not received; or the lawyer misses a Companies House deadline *and then* forges the date on an existing document so that Companies House will be mislead into thinking that it is filed within time.

When you make a mistake, fess up and take the consequences. Don’t try to cook the documents to conceal your mistake.

A ridiculous decision. Misconduct yes but nothing remotely to justify the loss of a career. Shameful

Total MoneyLaw powerhouse titan right there, where can I apply?!

Gething was struck off and ordered to pay £5,700 in costs = the just and proportionate SRA strikes again.

Do they have the power to get the costs off you even if you’re struck off? Or can you just tell them to go fuck themselves?

Deserves what he got!