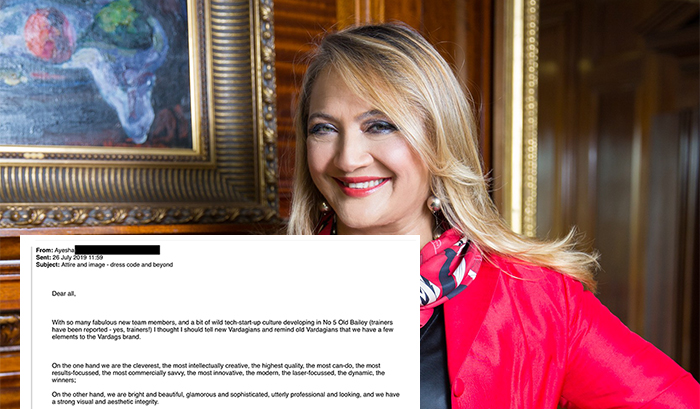 One of the country’s best known divorce firms is engaged in an extraordinary dispute with an upstart trade union over a leaked email about the firm’s dress code.

Law firm Vardags took to the High Court last week to secure an order preventing a former employee, whom it accuses of leaking the dress code advice, from disclosing other confidential documents.

The employee is a member of a trade union United Voices of the World (UVW), which Vardags says is trying to claim a high-profile scalp in its work “assisting workers to leverage their power against the bosses”. The union has hit back, declaring victory in the legal action and charging Vardags with choosing to “impugn our legitimate trade union activities”.

The firm, founded by self-styled ‘Queen of Divorce’ Ayesha Vardag, has already run up £68,000 in costs.

All this kicked off when a staff email containing detailed dress code advice from Vardag herself found its way to Legal Cheek in September. It included tips such as dressing “discreetly sexy and colourful and flamboyant at the same time according to your preference”.

Vardags believes that a former employee who is taking the firm to the employment tribunal was behind the leak, saying that she “forwarded certain confidential information to her private email account” the day she was sacked for “poor performance”.

The well-known family law outfit took the unnamed employee to the High Court. On 6 November, it obtained an interim consent order “restraining her from disclosing confidential information obtained in the course of her employment including a number of specific documents”.

But the ex-employee is a member of Legal Sector Workers United, a branch of UVW, as is her solicitor. The union has “declared victory” in the High Court showdown, saying that the judge turned down Vardags’ requests for an interim injunction and for disclosure of certain information within 24 hours.

The union has certainly gotten under the firm’s skin. In an extraordinary statement, Vardags says that “we are concerned that United Voices of the World is keen to have a cause celebre, and has targeted a law firm with a high public profile to do”.

“Of course, it is open to us to lie down under the pressure, to write a cheque, to roll over. But we will not be at the mercy of spurious and false claims and vindictive breaches of our confidentiality, to pay people off when we know we have done nothing wrong. At some point, one has to take a stand. This is where we take ours.”

UVW was only founded in 2014 and has around 5,500 members, of which almost half have joined since the start of this year. Its Legal Sector Workers United (LSWU) branch was set up last year.

The union hit back in a statement of its own, saying that Vardags had chosen to “impugn the conduct of the LSWU member who had taken the case on pro bono in his capacity as a solicitor, and for whose work the High Court Judge expressed his gratitude”.

“This victory is a demonstration to powerful employers that we will not allow them to use their finances and the legal process to gain an advantage over employees they have dismissed. We will now do everything to win our member the compensation she deserves. There is power in a union and I would encourage everyone in the legal sector who is in a non-managerial position to join LSWU today”.

Vardags is claiming costs of £68,000 relating to the High Court action. The ex-employee is claiming compensation for disability discrimination related to her dismissal. Vardags told Legal Cheek this morning that it would be “robustly defending” the claim. The firm also stressed that there has been no leak of information confidential to clients.