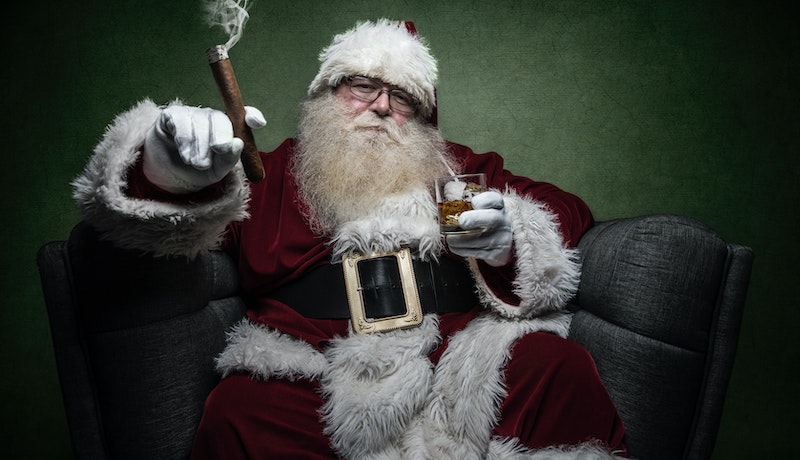 The Home Secretary is thought to be considering declaring Santa Clause a strategic threat to the wellbeing of the UK. She is seeking new, and more draconian, powers to turn back non-resident aliens who come to this country claiming to be motivated by ‘good will’ and a desire to ‘spread joy to every person’.

The cause of the alarm is that Santa’s annual visit to the UK may spread the virus in an uncontrolled way. Santa’s repeated visits to UK homes will mean he is exposed to people’s living areas. Health officials say that this presents a high risk of cross-infection. This danger of infection will be compounded, they suggest, if Santa also munches the mince pies and sips the sherry left out for him by people wanting to assist him on his annual trans-global jaunt.

Public Health England said that “Santa should act as though he was infected, not out for a fantastic sleigh-bell ringing joy ride in the snow.”

Officials say that Santa, who is known to pay scant attention to government laws, guidance and the tier system, would definitely be exposed to the virus, in all its mutations, as he visits different houses across the land. This could pose a significant risk to all the children he visits, whether they are good or bad. He will, in all likelihood, be sharing viral load with them, along with presents.

Given Santa’s unrestrained and rapid international movements — which are to be tracked by NORAD — the bearded super-spreader is likely to be a viral vector of unparalleled risk around the globe.

Santa himself is said to be in a high-risk clinically vulnerable group, exacerbated by his obesity and the stress of being (as many believe him to be) an essential front line worker at this time of year. Government sources say that “his own risk is his own business”, but that “he ought to have more thought for vulnerable groups he is putting at risk in his pell-mell rush to get Christmas done.”

Health Secretary Matt Hancock appeared to offer mixed messages on the arrival of the red peril to these shores. Mr Hancock, while cheerfully humming the ‘Fairytale of New York’ to himself on national TV, advised that Santa will need to use full PPE and be decontaminated after visiting every infected home. This will potentially slow Santa’s progress, Matt Hancock opined, with what might have been a tear in his eye.

The Attorney General, in the wake of her recent, valiant efforts in the Court of Appeal, is understood to be preparing to appear in court personally to try and deter the red-suited menace. A meeting of COBRA has also been called, which the PM will not be attending.

Overburdened lawyers from the Government Legal Department are at full stretch as they grapple with the implications of Santa Clause’s unauthorised home-visiting. They are working through the night (yet again) to create appropriate secondary legislation in response. It is hoped that this heroic production of new rules and guidance can curb the danger posed by the unwelcome interloper. Against this, critics say that much of this legislation may never be read, least of all by Parliament.

On the brighter side, it is understood that Santa will not be subject to delays at Dover because his delivery mechanisms are not dependent on either the channel tunnel, or the ferries. As a difficult year draws to a close, this can — hopefully at least — offer readers some mild relief.