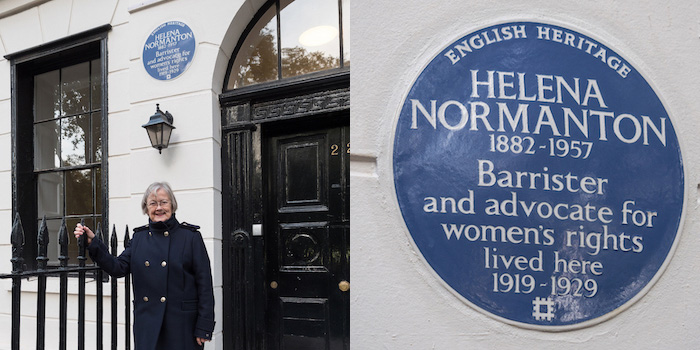 The first woman to practise at the bar of England and Wales has been commemorated with an English Heritage London blue plaque.

Helena Normanton’s plaque marks the address she lived for the early part of her legal career at 22 Mecklenburgh Square in London’s Bloomsbury.

Yesterday’s unveiling comes almost 100 years after Normanton passed her final bar exams on 26 October 1921, and was attended by senior female figures from across the legal profession.

Lady Hale, the first woman to serve as president of the UK’s Supreme Court, unveiled the plaque, saying: “Helena Normanton was the pioneer of women barristers. She had to overcome a great deal of prejudice and discrimination. A blue plaque is a fitting tribute to her courage and her example to women barristers everywhere.”

It follows a lengthy campaign by a group of women barristers at Doughty Street Chambers and the First 100 Years project to have Normanton’s profile recognised by the historical marker.

Special moment to have our patron Lady Hale pull the cord to unveil London’s latest blue plaque – dedicated to Helena Normanton, pioneering #womeninlaw brought about by application made to ⁦@EnglishHeritage⁩ jointly by #doughtystreetwomen ⁦@First100years⁩ on #IWD2018 pic.twitter.com/4yOd5CFDDA

Normanton scored a lot of ‘firsts’ during her time in legal practice. She was the first woman to practise at the bar and the second to be called after Ivy Williams (who was last year commemorated with an Oxford blue plaque) in 1922. She was also the first woman to be admitted to an Inn of Court, Middle Temple, in 1919, and hold briefs in the High Court and Old Bailey. In 1949, she became one of two women to be made King’s Counsel.

Anna Eavis, curatorial director at English Heritage, commented: “Widely acknowledged as a trailblazer, Helena Normanton scored a remarkable number of firsts in her legal career and paved the way for other women to advance in the profession. We are delighted to commemorate her with a blue plaque on the building in which she lived when she first started out as a lawyer.”

Her significance continues to the present day and in 2019, a London chambers renamed itself ‘Normanton Chambers’, a century after its namesake became the first woman to join an Inn of Court. Normanton Chambers was also the first set to be named after a woman. The following year, the first legal outfitters for women launched as ‘Ivy & Normanton’.

It would appear that Normanton is also the first female lawyer to be commemorated with a London blue plaque. A quick search on English Heritage’s website shows only a handful of former lawyers have been honoured in this way, and they’re all men. The former Lord Chief Justice Rufus Isaacs is commemorated with a ceramic plaque on his old Mayfair dwelling, whilst former Lord Chancellor Richard Haldane has one in Westminster.

The plaques mark sites of historical or cultural importance and honour Londoners who have made a significant contribution in their field. There are over 950 blue plaques honouring men and women, affixed to the walls of buildings old and new across the capital.

Yet, the scheme has been urged to redress the gender imbalance as it is estimated only 14% of the 950 or so plaques celebrate women.

English Heritage, which founded the scheme in 1866, launched its ‘plaques for women’ campaign five years ago and said it has since received a number of nominations for female figures. In 2021, half of its new plaques will be dedicated to women, and women make up well over half of the cases currently in the pipeline.

Behind The Reported Figures

It would break Helena Normanton’s heart to know how much sexual harassment and abuse women at the Bar today have to endure.