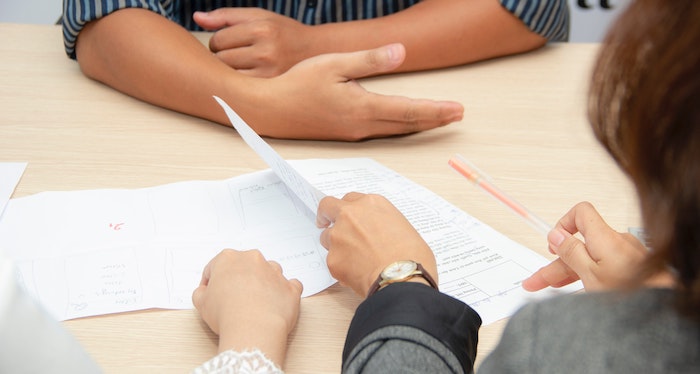 An experienced solicitor has been fined £20,000 after making sexual comments to a would-be paralegal during a job interview.

The Solicitors Disciplinary Tribunal found that Victor Nwosu made remarks such as “mmm, I like what I see” to the then 22-year-old job applicant, asked whether she had a boyfriend and told her to wear a skirt and heels.

The complainant, anonymised as Person A, told the tribunal that the experience left her feeling “like a piece of meat”.

The Solicitors Regulation Authority hauled him before the tribunal after receiving a complaint about the interview, which took place in April 2018.

Evidence before the tribunal included WhatsApp messages that Person A sent to her boyfriend and others during a break in the interview when Nwosu briefly left the room.

“I don’t know if I want to work here…”, she wrote. “He saw me 20 minutes late and told me how beautiful I was (repeatedly)…”

She also sent voice notes after the interview: “He asked me if I have a boyfriend. He said that I was very very beautiful. He told me that I have to wear skirts when I come into work, he doesn’t like it when women wear trousers. He said that I would only be working for him and nobody else… He asked me if I have a fucking boyfriend, what the fuck does that have to do with anything.”

Nwosu’s solicitor, Jonathan Goodwin, argued that the evidence was so weak that the case should be dismissed as “no case to answer”. With the evidence “50:50” — Person A’s word against Nwosu’s — the tribunal had a duty to throw it out.

Nimi Bruce, the SRA’s barrister, retorted that this “harked back to a dark age when the evidence of a woman was not enough”.

Nwosu denied all the allegations and said that Person A was motivated by “female activism gone wrong”. He did admit saying “mmm, I like what I see” in Person A’s presence but said that could “only have been referring to the CV” that he had just printed a copy of.

But the tribunal rejected this contention. It found Person A to be “credible, consistent, reliable and persuasive” as a witness; she also had the contemporaneous WhatsApps. Nwosu’s claim to be ogling her CV, by contrast, was at odds with the fact that he had previously seen it, plus “the words used were an extraordinary way to refer to an applicant’s professional credentials in the context of a formal job interview”.

The panel also found proved the allegations that Nwosu had called Person A “pretty” or similar, asked if she had a boyfriend and told her to wear a skirt and high heels.

Nwosu had suggested that the latter was a misunderstood discussion of the firm’s dress code. That document, if anything, served to undermine his case: the tribunal called it “disgraceful”, perhaps referring to the bit telling employees not to dress “inappropriately like people working in clubs or Strippers”.

The tribunal went on to find, as an aggravating factor, that this misconduct was sexually motivated. In considering sanction, it said that Nwosu’s actions had “caused extensive, direct harm to the reputation of the legal profession” and “represented a grave departure from the requisite standards of integrity, probity and trustworthiness that the public was entitled to expect from solicitors”. Nor had the solicitor demonstrated any insight into his behaviour.

As against that, there were several mitigating factors: “(a) the misconduct related to a single episode during the interview on 30 April 2018, (b) it was of brief duration (less than an hour), (c) previous unblemished regulatory record, (d) full co-operation and (e) the character references on the Respondent’s behalf.”

All in all, the tribunal decided that a £20,000 fine was the right punishment for the “deplorable, unacceptable and discriminatory” behaviour. On top of that, it granted the SRA’s application for £23,500 in costs.

I like these fines. They sound like a good deterrent for creeps to keep their comments to themselves.

Funny how solicitors know exactly how to behave in public when a paying client is in the room.

Absolutely shocking example of blatant sexism, and harassment in the workplace. The complainant’s impression of the legal profession must have been absolutely shattered during that interview. I hope the complainant is able to find a role somewhere where she feels that she can continue her career, safely and free from harassment.

I’m sure she will. Don’t think her ‘safety’ was an issue here though!

It is true. His behaviour was found as a fact. It is now an objective truth that he did what was alleged. That’s how our courts and tribunals work.

I think you’ll find that isn’t how reality works.

That isn’t how they actually work at all. In this type of case the tribunal is tasked to decide what they think happened on the balance of probabilities. This means that they are saying they think it more likely that its true than not. That doesn’t mean it is true or that it is a fact or objective truth, just that the tribunal think, or say they think, that the allegations were true. They don’t know if they’re true and would be the first to tell you that. There is pressure on tribunals to find in favour of accusers in tribunals don’t forget as they’re likely to be criticised and even have their personal lives pored over if they come out and say they don’t believe a female accuser, so we don’t know what they really think. Only two people know if it is true. It might be, but then again it might not.

It’s called advocacy, old boy, and it’s generally considered to be quite important.

I assume she didn’t take the job.