‘Work from a bus is the new work from home’, says Scott, Howard & Malone managing partner 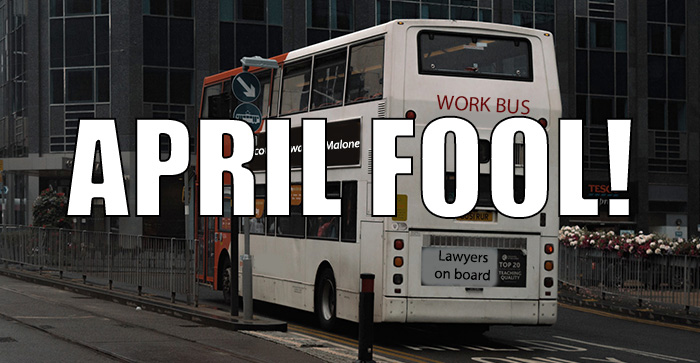 We’ve all worked from the office and from home, and now a law firm has rolled out its very own ‘work bus’.

City of London boutique firm Scott, Howard & Malone’s new hub on wheels tours around the country picking up a select team of lawyers to work together for a day each month.

The firm has purchased a reconditioned Volvo double-decker bus of 2004 registration which it has kitted out with desks, chairs, a break-out room, and Wi-Fi.

Managing partner Otto Mann told Legal Cheek that lots of the firm’s lawyers moved out of London after Covid hit, making the commute unfeasible, and the idea of having a mobile office a tempting prospect.

“Many law firms have adopted a hybrid model, with some form of remote-working alongside time spent in the office. But thanks to our relatively small team we’ve been able to go the extra mile with the launch of our ‘work bus’,” he said. “These days a mobile office isn’t just for hotshot politicians. Our lawyers can reconnect whilst working on-the-go. Work from a bus is the new work from home.”

The outfit trialled the work bus last month, with a paralegal with the requisite CAT D license assigned as driver. The inaugural trip saw the bus leave the firm’s parking lot in Fenchurch Street for one of the partner’s homes in the Cotswolds, picking up associates across London and the south east along the way.

One lawyer, who journeyed on the bus but asked not to be named, said it was a total shambles. “No one wants to work on a tightly-spaced bus,” they said. “Motion sickness is a problem, the seats (which for some reason have wheels) move around and are uncomfortable, and the Wi-Fi constantly cuts out — especially in tunnels. Senior management needs to put the brakes on this one.”

As the Scott Howard & Malone coach pulled back into its City base just after 1am last Thursday, after the 17 hour round trip, the alighting lawyers seemed tired but not exactly mutinous. Reports of the bus leaving one vac schemer stranded at a service station in Oxford remain unconfirmed.

With energy shortages and the rising cost of fuel, questions abound whether other law firms are likely to get on board.

Oh, wait, they work whilst the vehicle is driving?! Wow, I’d be hospitalised with travel sickness

Typically, Legal Cheek have cut this story down for publication and left out some important details. If you look at the full statement on their website, they make clear that they have installed a series of free-moving gimbals around each workstation, to maintain equilibrium whilst the bus is in motion.

Did the partners responsible for this terrible idea watched that one The Office US episode?
If so, did they skip the part where it was Dwight’s idea and obviously spectacularly backfired?

Characters in the show.

Do you need me to call your carer?

Why don’t you explain this to me like I’m 5?

Given that the comment was made by “Michael Scott”, I think this was a (poor) attempt at a joke.

Damn bro you got the whole squad laughing

Damn bro you got the whole squad laughing

Surely no one is called Otto Mann. even in London / Legal Cheek / April.

The name was stolen from the simpsons