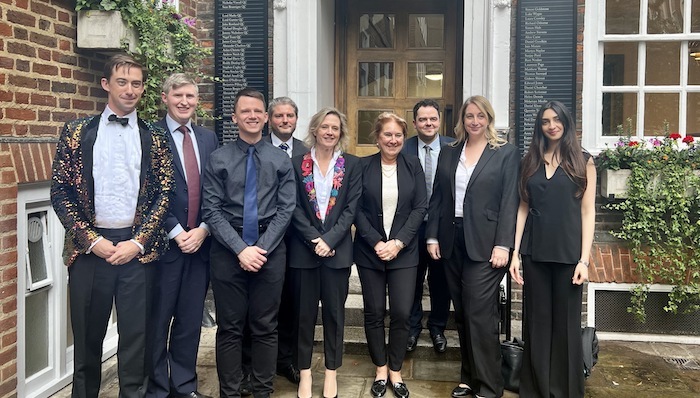 A pair of aspiring barristers with backgrounds in creative writing and languages have secured victory in 4 Pump Court’s inaugural Pride Moot.

The competition — run in collaboration with City law firms Simmons & Simmons and DWF – was to mark Pride Month, with 4 Pump Court tenant and one of the key organisers of the moot, Daniel Churcher, telling those gathered at the final last Thursday that the set wanted to “send a really important message that the commercial bar is open to everyone”.

Legal Cheek attended the final of the competition, which saw four students battle it out for the honour of being declared the winning team — and a share of a £500 cash prize! Sadly, one of the finalists had to pull out last minute due to illness, but 4 Pump Court pupil Kathryn Handley jumped in, coming to the moot straight from a hearing. She was safe in the knowledge that she wasn’t being judged this time, though she does have an impressive mooting CV herself.

The moot problem concerned a contract between a fictional LGBTQ+ venue and a fictional catering company specialising in catering for LGBTQ+ events, with Sir Elton John’s birthday providing the backdrop. Submissions were made on a confidentiality injunction and a termination injunction.

All three finalists were highly impressive. Future bar course student Boddy, who has just completed her MA Law at the University of Law (ULaw) having previously studied creative writing at Kingston University, was calm and collected in style, especially in the face of challenging judicial intervention from Lady Justice Carr.

Wytrzyszczewski, a languages graduate from the University of York who completed his MA Law at the ULaw and is currently working as a translator at the Court of Justice of the European Union, was described as “a fluent and attractive advocate”. Lady Justice Carr noted that his command of the law was particularly impressive and joked that it was well worth him making the trip from Luxembourg.

Ghafooryar, an LSE law graduate and current bar student at the University of Law, was described as “a natural advocate”. Her flair and passion when making submissions were particularly notable.

Boddy and Wytrzyszczewski were ultimately crowned the winning team. Reflecting on the moot, Boddy told Legal Cheek that “it was such a valuable experience and I’m so grateful to 4 Pump Court and everyone involved”. Meanwhile, Wytrzyszczewski told us that the moot appealed to him due to its LGBTQ+ aspect and that he “particularly appreciated the chambers’ unequivocal commitment to equality and diversity”.

The evening concluded with champagne and canapés, giving competitors, judges, and observers a chance to mingle and discuss careers at the commercial bar.

4 Pump Court tell us that they were overwhelmed with applications for the moot and delighted with the enthusiasm shown by students. As a result, Churcher tells us the set is looking forward to running the moot as an annual event.

You can meet 4 Pump Court and other leading sets at Legal Cheek’s Virtual Pupillage Fairs in October and December this year. Keep an eye on this page to see when registrations open.