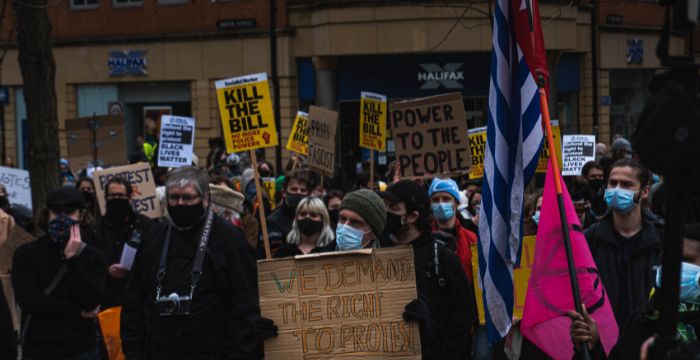 Solicitors convicted of a criminal offence at a political protest or demonstration have been given reassurance that they are unlikely to be struck off or face disciplinary action as a result.

The reassurance was issued this month by the Solicitors Regulation Authority (SRA), which sets and monitors acceptable standards in the profession. The SRA stated:

“Ordinarily we would expect a member of the legal profession or anyone aspiring to join it to not engage in any unlawful activity.

“However, we appreciate that some people legitimately have strong opinions on moral and ethical issues such as environmental or racial issues. We respect individual views, freedom of speech and the right to protest.”

The SRA guidance, published on 1 September, advises “we have broad discretion to consider the context in which any criminal convictions arise… We will consider each case on its own facts. There are a broad range of factors that affect how seriously we will view a matter”.

A conviction arising from “principled action or participating in a peaceful protest” where that conviction “does not involve a significant risk of harm to the public and/or material risk to property” is unlikely to lead to any regulatory action “as long as it is disclosed to us”, according to the SRA.

Crucial factors that might lead to disciplinary action include failing to promptly report the conviction to the SRA, resisting arrest, breaching a court order or otherwise failing to “co-operate with the legal process”. There must be “a genuine desire to further a wider public, social, or environmental interest”. The SRA also emphasises that it takes abusive conduct, such as hate speech, “seriously because of the potential to impact on trust and public confidence in the profession”.

The SRA has also published comprehensive new guidance on sexual misconduct this month, in response to a rise in complaints.

The guidance underlines that intoxication is never a defence to an allegation of sexual misconduct. It covers a range of thorny issues such as unequal power relationships in work, sexualised comments, hints that careers may be jeopardised or enhanced, workplace social gatherings that morph into nights out, and consensual relationships forged through work that become non-consensual.

It also refers to the case of former Freshfields partner Ryan Beckwith, in which the High Court endorsed regulation of professionals by reference to private conduct although it quashed the Solicitors Disciplinary Tribunal finding against Beckwith.

According to the SRA, it has received 251 reports of potential sexual misconduct since 2018, compared to 30 in the preceding five years. It currently has 117 on-going investigations.

Paul Philip, SRA Chief Executive, said: “These can be sensitive and difficult issues and we want to be clear about our expectations, not least for firms, as people often come to us because they are dissatisfied with the way their firm has dealt with their concerns.”

Seriously – would this rule apply if a solicitor were to protest against mass immigration in the UK?

Or on the other hand, if they protested in favour of a caliphate in the UK?

Many people around the world feel very strongly about these things too.

117 sexual misconduct investigations at one time, and there will be loons on LC that think every single one is made up

It will be telling to see how many are upheld.

Will this discretion apply to all instances of free speech or will it only apply when it’s in line with leftist views/opinions?

Interesting point will be whether the SRA will decide which “principles” are the good ones. For example if anyone were stupid enough to be a keen member of some kind of white (or black) power alliance in favour of racism would that principle be okay as much as the eco ones they seem to live? If someone were protesting against wind farms would the SRA be happy? If you were a woman who is keen to preserve women’s rights would the SRA be happy if you were protesting against men in women’s changing facilities?

I am not sure the SRA has gone down a good path here. Better to keep things simple – solicitors should not break the law.