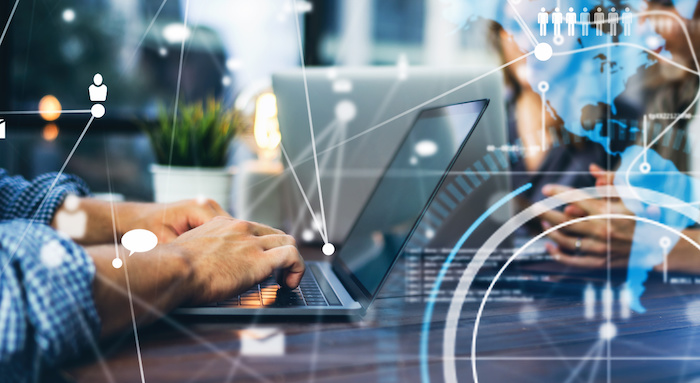 At Legal Cheek’s latest virtual event, ‘Re-imagining global law firms in the age of remote-working’, four partners across Allen & Overy’s international offices offered an overview into how the magic circle firm has adapted to the era of remote working.

The rise of remote working

William Samengo–Turner, a corporate and M&A partner at the firm’s London office, explained the technology was already in place. “We invested a lot of time and money to make sure we can go online flexibly in case of an emergency,” he told a virtual audience of over 700 students. Being able to take home second-screens and office chairs was also a massive help, added Marieke van Hooijdonk, a litigation partner in the firm’s Amsterdam office.

That said, the global firm continues to be “sensitive to the fact that not everyone’s working from home conditions are equal”, explained Elizabeth Leckie, a banking and finance partner at Allen & Overy’s New York office.

One difficulty of working from home is the lack of social connection that you naturally find in the office. “Most of us are quite sociable and like to spend time with each other and thrive off that — both in terms of support, but also celebrating when certain things go right,” said Samengo–Turner.

With this brings another challenge around mental health. Despite remote working leaving employees more connected than ever before, the physical distance between lawyers can increase isolation, blur work-life boundaries and potentially diminish a sense of community. “It’s important we connect on a regular basis,” stressed van Hooijdonk, who revealed that her team scheduled calls every day in the early days of lockdown. “We had to make people aware of how to deal with stress and the importance of turning off work mode,” she explained.

Six months down the line pre-pandemic working habits have changed. “I used to be quite profligate around the printing that I did,” said Leckie. Although she still finds it easier to “catch more things” when reading paper than on-screen documents, she is now “more thoughtful” about what she prints.

Meanwhile, Amsterdam-based van Hooijdonk explained that when it came to the quarterly team check-in meetings, usually held in the office, she instead met with colleagues at their homes and spent time with them walking around their neighbourhoods. “That worked out fantastic, I thought it was really nice walking with your colleague, talking about what you want to achieve — and I think I might stick with that,” she revealed.

According to Pierre-Olivier Mahieu, a corporate partner in Allen & Overy’s Brussels office, virtual meetings through Webex and Zoom have simply replaced conference calls. “Having a call now seems a bit old fashioned”, he said, recounting the difficulties sometimes encountered when dialling into a conference meeting. Now people are more on time, attendance is much higher, and the only challenge is which platform to use, Mahieu explained.

A new way of learning?

One concern is the impact of remote working on trainees, who typically learn on-the-job through osmosis. “You learn a lot by watching people making mistakes, fixing them and not getting stressed by it,” said Samengo–Turner.

Replicating this in-person experience requires being more “programmatic” and identifying what actually is “the magic in a training contract”, he continued. Whether you’re showing trainees techniques over the phone or online through a screenshare, there are “different ways of providing the same training”, Leckie added.

While some see remote working as an opportunity to outsource more junior tasks to lower-cost countries, the panel thought otherwise. Regardless of the global status of any law firm, the legal industry will remain “nationally fragmented” due to different legal jurisdictions, Mahieu said. The difference between cultures is another barrier to wider outsourcing. After all, one of the reasons lawyers are valued so highly is because of their conceptual and cultural legal awareness that is developed through training and experience, said Leckie.

The tech industry is booming, according to Samengo–Turner, who works closely with the firm’s London tech hub, Fuse, and usually splits his time between Silicon Valley and the City. Advising the likes of Google, Facebook, eBay and PayPal, he predicted that global tech companies have a “real role to play” in the ‘new normal’.

An obvious example is the integral role which Zoom, Webex and other video conferencing platforms have played during lockdown. Less obvious is the important role which online food delivery companies play. Deliveroo, for example, has gone from being an easy way to get a takeaway pizza to an essential food delivery service, Samengo–Turner told attendees.

We've just finished the panel discussion at our fully booked virtual event with @aogradsuk, 'Re-imagining global law firms in the age of remote-working'. Now it's time for over 700 attendees to get stuck into video networking with the speakers, trainees and the magic circle firm's graduate recruitment team ? ☕ #VirtualLegalCheek

This boom is good for law firms like Allen & Overy, whose tech clients need help navigating complex legal issues. “People don’t come to us with the run-of-the-mill questions — they come to us where things are new,” he explained. “The joy of being at Allen & Overy is that you’re in the thick of it.”

Focus on what excites you

While uncertainty pervades the legal sector, the panel provided clear ways to stand out in a competitive graduate market.

Applicants should focus on an area of law which genuinely excites them so you can flex your knowledge during interviews. “You don’t need to talk about this area as a market expert, rather just someone who’s spent time thinking about it,” Samengo-Turner told the virtual audience. That said, don’t fall into the trap of thinking there is a mould you need to fit. “We like people that are different,” said van Hooijdonk. “Diversity of thought and approach is important,” added Leckie.

And as lawyers gradually return to the office, Mahieu reminded the audience that when law firms consider training contact candidates, they are constantly asking themselves: “Would I want to be working with this person?” And although candidates may be happy to take whatever they can get, don’t forget that this works both ways.