Gareth Richards, the LPC Programme and Student Lead at ULaw Moorgate, tells Aishah Hussain what 20 years of experience have taught him about doing well on the Legal Practice Course 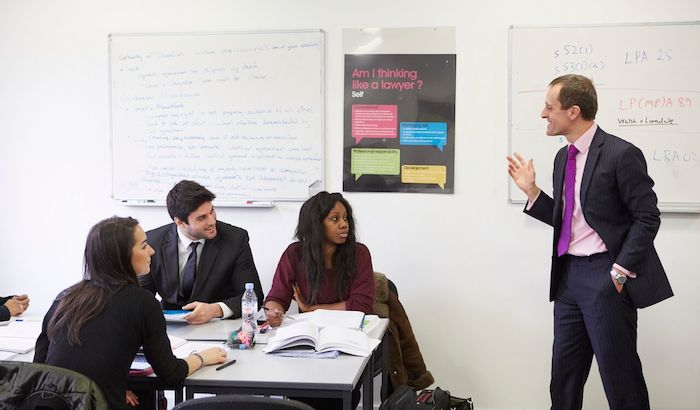 Studying full-time on the LPC is “very intensive” says Richards. It typically requires 45 hours each week in the first term (55 hours on a six-month accelerated LPC), something that takes some students by surprise. “You have to be realistic about what you can achieve in the time that you’re here and how much time you have to invest in study,” he says. Working full-time alongside studying full-time for the LPC is “wildly optimistic”, according to Richards, who has over his years at The University of Law “known people who’ve tried and regretted it!”

That’s why they offer several part-time study options. Richards recommends securing any legal employment or work experience prior to starting your LPC — that way you can “hit the ground running” when term starts. “These are big time commitments so don’t spread yourself too thinly,” he reiterates. Though there are a significant proportion of students that do manage to find time during the LPC to secure a training contract.

Think carefully about your electives, cautions Richards. Some law firms prescribe which ones they’d like prospective applicants to take; it’s worth contacting a firm that you’re applying to in order to establish whether that is the case for them. “A commercial firm might question your focus should you apply with electives in family or advanced criminal — you have to be sensible,” he explains.

Richards advises researching this well before making your choices so that you are fully prepared. If you’re not constrained in your choice, “pick modules you’re most interested in” as it’s invariably the case “you’ll end up considering law firms who practise in those areas”, he says.

The LPC is a great introduction to a number of sources for help and advice. “Be alive to the fact that your time with us is not solely for passing exams — there’s a lot more to gain,” Richards says. In the months before starting the LPC, Richards advises getting to know the ‘Employability Team’ on campus. The team runs regular networking events, CV workshops and offer one-to-one appointments. There’s also a wealth of material that can be accessed online; for example, the University’s dedicated Future Lawyers Network features a comprehensive ten-step legal careers programme called StEP.

Another network is your classmates: “It’s amazing what you can glean from them in terms of legal education and their experience in the job market — do not underestimate this resource”, Richards says. “Keep your antenna alert. There will be people on your course that you can learn from”. The University also has a mentoring programme where “students are paired with lawyers who are very keen to help,” he explains. And of course, every student has a personal tutor who they can turn to, Richard tells us. “Tutors are genuinely interested in your progress” — and, since all are experienced legal practitioners, “they know and understand your ambition”.

“There aren’t many shortcuts on the LPC,” Richards explains, “you have to put the effort in”. But that isn’t all. He tells us you have to be “smart” about the way in which you work. “The LPC is not about regurgitating knowledge,” Richards warns, in reference to the rote learning he finds some students expect. He continues:

“You’re now learning about the practice of law and applying legal knowledge to real-life scenarios; the most successful students make the leap early on and realise this is a different style of course and assessment than encountered previously.”

It’s a common misconception that since most assessments undertaken during the University’s LPC are “openbook” that the course is “simple”. That’s not the case: “We’re operating at masters level; it’s both practical and vocational,” adds Richards, who also lectures on the real estate course.

The teaching is broken down into a series of workshops and students are given one or more preparatory tasks to complete before each. “It’s helpful to think about the intended outcomes of a workshop before you start on your preparatory reading,” advises Richards, “this way you can tailor your reading around the outcomes — that’s what’s efficient, not taking notes laboriously on each page of each chapter of a textbook”. Since the revision periods are typically quite short, Richards recommends “carving time” after a workshop to “consolidate what you’ve learnt”.

Richards recalls how one determined student made over 150 applications before eventually securing a training contract at a top City law firm. “If you keep trying you’ve got a chance and if you don’t you’ve got no chance”, he says. Richards thinks it’s important that students who take the paralegal route after completing the LPC view this as an opportunity rather than a setback. “You’re still working in the legal world and there are people out there who would bite your hand off for that opportunity,” he says. Performing well in one of these positions could boost your chances of securing a training contract. “Do not give up,” he asserts, “remain positive and learn from every experience”.

Gareth Richards will be speaking at our first Secrets to Success event, in Moorgate on Tuesday 13 February, alongside lawyers from Ashurst, Linklaters and Ropes & Gray.