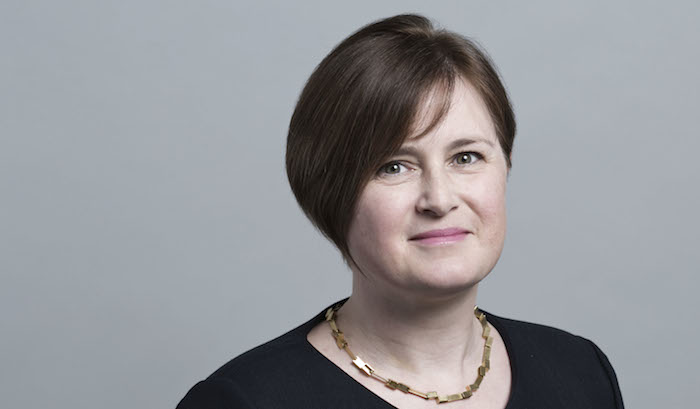 In today’s fast-paced world, it’s a relief to talk to someone who is working amid the legal/tech interface, and yet also a firm believer in taking things slowly; someone who counsels that plunging in headlong might not always be the right call. Step forward, Emily Clark, a tax partner at Travers Smith — and one of the most grounded lawyers you’ll ever meet.

“Not everyone knows that they want to go into the law from their late teens,” says Clark (pictured above), who took A-Levels in History, English Literature and Classical Civilisation before going to Oxford. “I certainly didn’t — I read History at Oxford, and still wasn’t sure what I wanted to do after I’d finished my degree.”

So, rather than clocking up hours of work experience in law firms or identifying the conversion route, Clark took a job with the mental health charity SANE upon leaving university. She spent two years with SANE, before moving to Childline, the free 24-hour counselling service for children. “I worked with Childline for two years as well,” says Clark, “and was a fundraiser for both organisations. I really enjoyed both jobs, but began to feel that I wanted a change.”

Clark spoke to two people about career options: one worked in marketing, the other was a shipping lawyer with a City firm. The latter’s tales of legal life piqued her interest, and before long Clark had sounded out some other lawyers. “It was quite a slow, almost organic process, but eventually I decided on the law,” she says.

The die cast, Clark threw herself into two tasks: securing a place on what was then known as the Common Professional Examination (today’s Graduate Diploma in Law), and trying to find a firm which would help fund converting to law. “I was very fortunate,” she recalls. “I had two interviews with Travers Smith and clicked with the firm straightaway. What was great was how down-to-earth the people were. I was quite naïve in those days, and no one from my family had ever worked in the City, but people at the firm put me at ease. I discovered that the City was full of normal people after all.”

Once at the firm Clark gravitated to tax work — but not, she says, because she is especially numerate.

“It’s something of a myth that tax lawyers are brilliant at maths,” she says. “That’s not what being a good advisory tax lawyer is all about. Quite often, by the time a client needs tax advice, the finance director will have been all over the numbers; that side of things will be clear. Yes, you need to be able to understand a set of accounts, but what the lawyer does is give meaning to things through language. Having said this, my tax colleagues doing transactions dive into the numbers with alacrity — creating spreadsheets which drive the economics of a deal.”

Having joined Travers Smith in July 1998 as a trainee, Clark went on to work as an associate for 11 years before becoming a partner in 2011. Specialising in the taxation of asset managers and investment funds, and acting for private equity houses, debt funds, infrastructure, venture and real estate funds, Clark takes pride in having played a significant role in building up the firm’s asset management practice: “I think this, rather than a single matter or transaction, is the highlight of my career,” she says.

Outside work, Clark’s three children, 15, 11 and eight, keep her busy — and so do films. Clark and her husband are cinephiles, and have passed on their enthusiasm to their children. “We all really enjoyed a Cinema Museum funding event at the Elephant and Castle recently, featuring Mark Gatiss (of Sherlock and League of Gentleman fame) talking about his favourite films,” she says.

But once amid the corridors of Travers Smith, Clark’s mind is focused on the tech zeitgeist and how it’s influencing her work as a tax lawyer:

“Technology is having a huge impact on the law and on our practice. Some of the largest and most exciting deals we have been involved in reflect this focus — Shazam’s acquisition by Apple Inc, Micro Focus International’s merger with Hewlett Packard Enterprises and acting for the management team of Dealogic are all very recent good examples. Our Commercial, IP and Technology team — advising clients on the impact of blockchain and AI on their business — is one of our fastest expanding practices.”

She adds that in the longer run she expects “the impact of technology on tax will also be profound”, continuing: “Around the world, countries are struggling with 19th century systems which calculate a company’s tax bill by reference to its activity in their jurisdiction: this ‘feet on the ground’ approach becomes less workable as businesses conduct their activities online. Tax authorities are beginning to respond and — at EU and OECD levels — are doing so in a co-ordinated fashion: there is lots of change on the way. For a tax lawyer, that is exciting, but also exhausting!”

But for all that the legal work she handles as a partner is as dynamic and cutting edge as any, Clark is adamant that the law is broad church — and one that can accommodate those who, like her, take a more circuitous route into the profession: “It’s great that so many young undergraduates get a sense of the law by working on vacation schemes, and do other things to show an early interest in the law, but those who take their time have often got just as much to offer.”

Emily Clark will be speaking at ‘Technology: Disrupting the law and lawyers — with Travers Smith’ on Thursday 18 January.