The final report of the Legal Education and Training Review (LETR) – potentially the biggest shake-up of legal education in three decades – was due last month. But as yet there has been no sign of it…

There have been murmurings as far back as autumn 2011 that LETR was going to struggle to keep its December 2012 deadline.

But there remains no mention of any delay on the LETR website, or the websites of the Solicitors Regulation Authority (SRA) and Bar Standards Board (BSB) – which continue to state that LETR’s final recommendations “will be published in December 2012”.

The only clue as to when we’ll get to see the final report can be found in a tweet issued by the LETR Twitter account in November in response to a question by a journalist. It confirms, in a rather round about way, that the report has indeed been delayed. I wonder why LETR hasn’t placed this useful piece of information on its website? 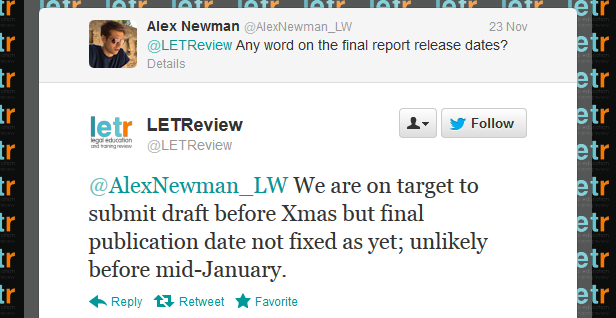