An ‘irresistibly special’ career but one littered with heartache; Legal Cheek reviews Stories of the Law and How It’s Broken 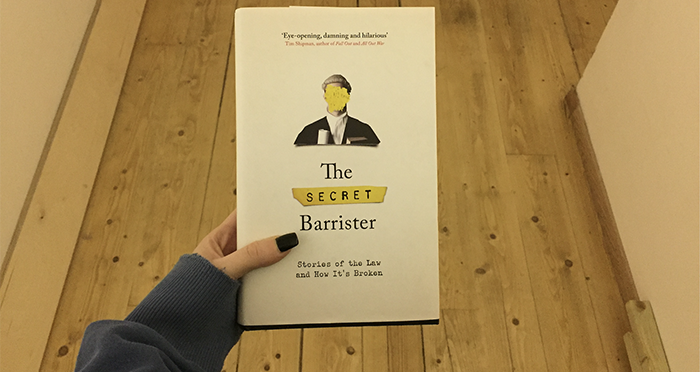 When I was at school, I wanted to become a criminal lawyer. Having read The Secret Barrister: Stories of the Law and How It’s Broken, I’m thrilled I didn’t.

In between going viral on Twitter and holding down a criminal law practice, The Secret Barrister (TSB) decided to write a book “to shine a light on the serious problems in the criminal justice system which we in practice see every day”. ‘Serious problems’ here is an understatement — it’s difficult to disagree with TSB’s titular contention that the law is “broken” even before his first chapter, ‘Welcome to the Criminal Courtroom’, is over. He summarises:

“[Working in criminal law] is unpredictable, irrational, adrenaline-infused mayhem every second of every day, where the only certainty is uncertainty. Hearings and trials overrun, find themselves suddenly adjourned or are listed immediately without warning, making it impossible to say with confidence what you will be doing or where you will be in four hours’ time. Your bones ache, your shoe leather disintegrates bi-monthly and your shoulder creaks from dragging your suitcase laden with papers, books, wig and gown between courts and cities.”

What follows are more than 300 pages delving deeper into the key areas in which the system is broken (i.e. all of them). Expect a slow start: the text begins with the less juicy, but still manic, magistrates’ courts (“the accident and emergency department of criminal justice”). Later, we move onto topics including the failing prison system (“an expensive way of making bad people worse”) and the “indescribably horrid” realities of criminal cases collapsing.

Someone who has traced criminal justice’s decline into cesspitdom may be left thinking ‘yes, I knew this already’ (even if ‘this’ is told in a punchier, sassier way than the language of journals and news reports). But, what steers Stories of the Law and How It’s Broken into ‘must-read for anyone thinking of joining the profession’ territory is the first part of its title: the stories.

About a third of the way into the text, we meet Amy Jackson (all names pseudonyms), a young woman domestically abused for years by ex-prisoner Rob McCulloch. Aged 22 when Rob “really lost his shit”, Amy was dragged by her hair outside of the couple’s house and repeatedly punched, suffering severe facial injuries.

It could have been an open-and-shut case, yet missing papers led to multiple adjournments and, eventually, all charges being dismissed. “I don’t know where the fault truly lay,” a blindsided TSB comments, “I just know that something, somewhere, went very, very wrong.”

We’re also introduced to Darius, a client with “crippling” learning difficulties, born to a big-drinker mum and a heroin addict dad.

Charged with robbery after grabbing a fiver from him dad’s wallet, Darius found himself lingering in the cells for two months “in conditions of the utmost inhumanity”, as no one had applied for bail for him. “When I got back to chambers I kicked a wastepaper bin across my room in boiling, impotent rage,” TSB reveals. The case was the first “to reduce me to tears”.

The human cost of the creaking system laid bare, one asks: why the hell would anyone want to work like this? A melting pot of “miserly” pupil pay, prohibitively expensive bar training courses and a job that sounds more frustrating than stubbing your toe — no wonder the profession is “deterring the brightest graduates”.

To this, TSB has a very worthy answer.

Criminal law practice, he says, is “irresistibly special”. There’s a persistence in viewing the criminal justice system as at an arm’s length away (“it’s just the underclasses who are affected”), which perhaps underpins the nonchalance towards how “close to breaking point” it is. But, anyone accused of a criminal offence, or witnesses one, or is a victim of one, has a stake in the system functioning property. “And anyone who values liberty” too. So, though working for less than £3 per hour for some cases isn’t for everyone, “what I do on a day-to-day basis [is] not just a privilege but a civic responsibility”.

This lust for justice does, indeed, underpin many barristers’ career choice. But, alongside “official stock answers”, let’s not forget “the cry for attention” and “the desperate need to be centre stage in the climatic scenes of people’s lives”, too.

This window into TSB’s psyche is pretty much all you can expect to garner from this book — which will be released this week — as to its author’s identity. We think he’s a male based somewhere South-West, but are told early on that details about the stories shared have been changed to protect the identity of the parties (and the author, we’re sure).

The anonymity may be frustrating for TSB’s fans, yet spare a thought for those closest to him. On the “gruelling” writing process, he tells us: “It requires an awful lot of patience from family and friends, not least as almost all of them have no idea what I’m doing.”