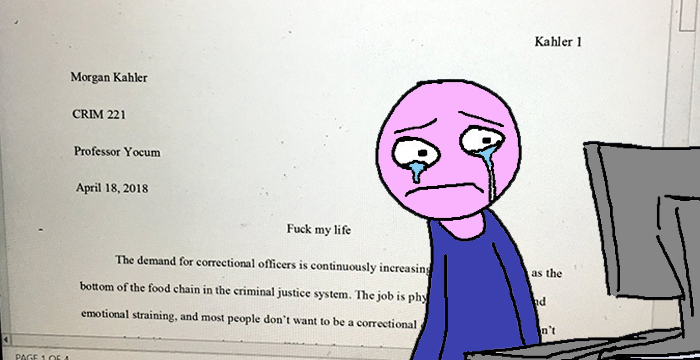 A student who appears to have made the very unfortunate mistake of submitting a criminal law essay with the title ‘Fuck my life’ has gone mega-viral after she posted about her embarrassment on Twitter.

Morgan Kahler says she forgot to update the title of her essay on the criminal justice system before she filed it her professor, Joe Yocum. Rather than shying away from the error, Kahler, who is in the second year of her degree at the University of Nebraska, decided to share her shame on social media.

Though Kahler has a humble Twitter following of 765 people, the tweet’s impact has been far greater. At the time of writing, the post has a staggering 57,000 retweets and 270,000 likes.

I turned in my paper to my professor last night and this morning I realized I forgot to change the title…hows your day going? pic.twitter.com/FnornTF00n

Some tweeters have, however, questioned whether the whole saga actually happened. This speculation has prompted Kahler — who describes herself as “a crim major” on her Twitter account — to post a photo of what seems to be her professor’s reply to the email. It reads: “Hi Morgan, I have received your project paper. Thank you very much.”

Legal Cheek has reached out to both Kahler and her professor but hasn’t heard back. On Twitter, Kahler says she’s now emailed Yocum a new file, which we assume contains a more vanilla essay title.

Though the thought of submitting an essay with such a flagrantly inappropriate title is enough to keep some students up at night, it seems Kahler isn’t alone. Another tweeter, Faith Jay, says she did something very similar:

i kid u not, I did the same damn thing pic.twitter.com/Bjx95npNSf

Let this be a lesson in the importance of proofreading…

Sign up to the Legal Cheek Newsletter
Social Media Students

Must be Friday. Not that the standard round here is ever particularly high, but Friday always seems to generate jawdroppingly banal content.

God help us next weekend with the Bank Holiday; my money’s on “I like colouring, says person doing law”. Yay journalism.

I once left a facetious comment in a skeleton argument for the Court of Appeal.

It backfired and now I sell ice for a living.

That’s not very nice now is it

Bugger off fascist, I’ve got the right to free speech.

“Let this be a lesson in the importance of proof-reading”

serves you right for taking a criminology module

I’m a bit confused at why people complain about every silly article as if Legal Cheek has ever been a fountain of substantive legal news.

This is the Buzzfeed of law. Enjoy it for what it is, an article that makes you giggle slightly.

I agree, some people comment like it’s supposed to be some kind of broadsheet. I hope LC staff have fun reading all types of comments and they should do an article on what they feel about/laugh at in the comments section.

Tell us about your feelings Katie King. There is only so much we can gauge from your articles and the limited photographs you publish on social media.

If she’d titled it “Fuck da Polees” that would be interesting. This isn’t.

No one has mentioned Professor Yocum? That’s a funny name, considering “fuck my life” is the title to the paper that was submitted.

Criminology =/= criminal law. Doing the latter gets you a low paid tenancy at some legal aid set and the former a tenancy at mcdonalds.