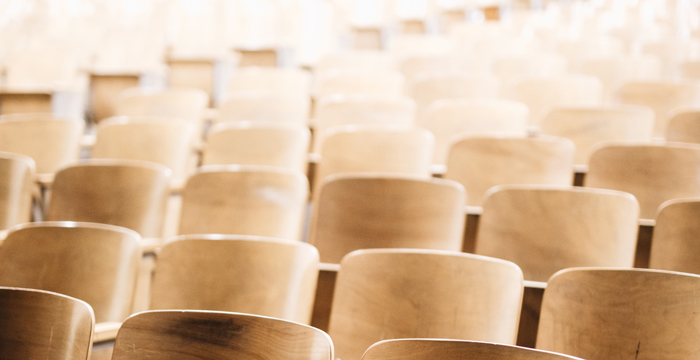 Something is happening in university law faculties across the country.

While the number of people applying for and accepting undergraduate places at UK universities in general has fallen since last year — with subjects like nursing, history and philosophy, and European languages experiencing notable declines — much the opposite is happening to the humble law degree. The number of applications made to study the LLB increased by 4% in 2017 on the year before, while the number of acceptances grew by the same percentage.

This increase doesn’t lie at the feet of all law schools. Numbers are down at the likes of Aberdeen, BPP and London Met. But the numbers are up, and we mean really up, at seven faculties we’ve coined ‘super law schools’, which last year received acceptances from a whopping 500 new students or more.

In our exclusive report on this septet last month, debate raged below the line about the potential impact big year groups is having on undergraduate students’ university experience, particularly on the quality of teaching and support they receive.

Law school bosses outside of the ‘super schools’ bracket have seized on these concerns to argue the case for limiting numbers. Thom Brooks, the dean of Durham Law School, tells me that while “bumping up students to 500 or more might be good at raising income for a university”, small-group teaching is better for the students and this may be compromised. He argues:

“I really would worry about accepting cohorts of 500 or more students. Students want a great experience and a degree that will be an entry ticket to a promising career. This is not something you can mass produce.”

But — is that what big law schools are doing?

We can’t simply focus on the 500-club members: there are 12 faculties who took on more than 400 but less than 500 new law undergraduates last year, too. They are: Birmingham City, Birmingham, City, Coventry, De Montfort, Kent, Leeds, Liverpool John Moores, Portsmouth, Sheffield Hallam, UWE and Westminster. Twelve more accepted between 300 and 400: Belfast, Bristol, Cardiff, Exeter, Hertfordshire, Hull, Lincoln, Manchester, Manchester Met, Reading, Salford and Swansea. That leaves 24 universities with law school cohorts of between 200 and 300, 35 with between 100 and 200, and 15 accepting a number of law students in double figures.

A student from one of the bigger law schools, Exeter, which accepted 395 students last year, is like Brooks dubious about the quality of teaching a big department can provide. He says:

“While the lecturers [at Exeter] are reputable, the vast number of students required a similarly vast number of seminar groups and teachers. As a consequence, I felt that some of the seminar leaders were perhaps slightly under qualified/lacking experience.”

In response, Richard Edwards, the head of the University of Exeter Law School, says the department’s courses are “carefully structured to give students support to do well in their studies, develop skills needed for their future career and also to create a sense of community” and “are led by world-leading academics who are experienced and innovative teachers”.

In contrast to the above-quoted Exeter student, one of the very few law students studying at Cumbria thinks: “You know the tutors so well and they know you, I don’t think I’d have grown as much if I didn’t have that help from them.”

Aside from Oxford and Cambridge, which take on just over 200 new law students each, the five law schools with the best (lowest) ratios have cohorts of no bigger than 175 per year. While you can expect 12 students per one staff member at some law schools, Northumbria’s ratio is 16:1 and Essex’s 18:1. Nottingham Trent and Leicester both score 19:1. Liverpool’s is 26:1 and Leeds Beckett’s 28:1.

That said, there are plenty of smaller law schools with wider ratios than that. Stirling’s is 36:1, for example, and it only took on 155 students last year.

Though you might be less supported at some larger law departments, according to these rankings, it’d be hasty to assume ‘big law school’ equals ‘crap teaching’ (and vice versa). Rankings don’t seem to show any correlation between quality of lessons and law school size — at all.

The three worst-rated law departments for teaching (again, according to The Guardian rankings) are: Westminster, London Met and Brunel. They took on 435, 85 and 255 new aspiring lawyers last year, respectively. Cumbria, with its tiny 20-strong cohort, scored as well for teaching as Belfast (325) and Nottingham (290) did. While Bucks New University — which only took on 15 newbies last year — performed the same as Queen Mary University of London and its 285 fresh-faced law students.

When we approached the seven super schools to ask about their 500+ law school numbers, NTU told us it prides itself on being “one of the most innovative law schools in the country”. It points out that 96% of its students are now in employment or further study which it says is “testament to our excellent facilities and teaching staff”.

The University of Law is similarly secure in its size (perhaps because it only does law courses and therefore doesn’t have any other students to support). Its vice-chancellor and CEO, Andrea Nollent, comments:

“The University of Law is utterly committed to our students’ success and their achieving their career ambitions. Our focus on the excellence of the student experience, on employability, as well as widening access to the legal profession, means that we are rapidly becoming the first choice for many students who are serious about a career in law… As evidenced by our TEF Gold ranking, we consistently deliver outstanding teaching, learning and career outcomes for our students — it is of the highest quality found in the UK.”

As for Liverpool, the biggest undergraduate law school in the country, it puts its ballooning department size down to social mobility and inclusion. Taking on more students “has greatly enabled” it to increase diversity, “as well as allowing for significant investment in clinical legal education and co-curricular activities”.

Perhaps it’s unsurprising big law schools would back themselves in this way. But the students studying on mammoth law courses have good things to say, too. One, from NTU, shares:

“If you actually want to engage with your course and your tutors, then it’s quite easy to get to know people. There are so many people that you can talk to, that do a whole range of courses offered by the law school.”

A Liverpool law student agrees. Though she concedes there are “a few negative aspects to being a part of a large law school”, such as tutorial classes of up to 30 students, overall “it has been a great experience!” She says:

“I have made so many friends and I do believe that super law schools are not to be frowned upon. They provide students with an exceptional law student body, which is a hugely positive aspect of studying law.”

So perhaps we shouldn’t be too hasty in dismissing big law schools. Just take the top-rated law schools across the pond. The likes of Harvard and New York University take on about 560 and 430 students respectively, and are considered among the best law schools in the world.

Alastair Mullis, who is the head of Leeds Law School and its 445-strong student cohort, certainly adopts a more measured approach. While he agrees that we should remain cautious about large law schools, they bring benefits such as: the ability to put on more law modules, and that a big student population attracts recruiters to law fairs. “A well-run law school, regardless of its size, can deliver an excellent student experience,” he concludes.

But what that really, really doesn’t mean is that all big law schools are automatically great, either.

“It all depends on the attitude law schools have towards their students,” Mullis continues. “I have seen law schools that, research-wise, are absolutely excellent. And yet, they just don’t get student experience right. That’s really nothing to do with their size.”

Threads of discontent seem to impact plenty of students’ university experience, no matter what size the law department. Lack of study space is one: a survey of more than 1,500 of our Instagram followers shows 79% of law students struggle to find a spot in their university library. Another is feeling like a low priority for law tutors busy with research. “[At my university] you feel like you are part of a top institution and yet at the same time, like you are the most unimportant law student there is,” one student, strikingly, tells me — and there are only 200 new law students at her top-rated university.

The picture becomes even more complicated when you throw in the ‘value for money’ debate.

Law students pay the same fees as their counterparts reading other subjects, but their course is comparatively cheap to put on. This is not least because contact hours are low and because you don’t need specialised study space nor fancy equipment to teach law.

The extra revenue enjoyed by bigger law schools through course fees, then, may in fact be being used to subsidise more expensive courses taught elsewhere at the university. This is all dependent on internal policies and university structure, which, though shrouded in secrecy, could well prove pivotal in one’s decision to embrace or reject the super law schools movement.