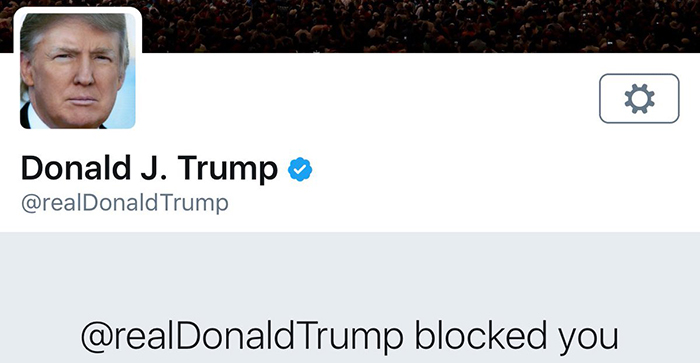 A US court has ruled the country’s controversial president cannot block someone on Twitter “in response to the political views that person has expressed”. To do so, District Judge Naomi Reice Buchwald said, would be a violation of the right to free speech.

Donald Trump has 52 million followers on Twitter and, since his inauguration, uses the social media platform to communicate and interact with the public about his administration.

The case was brought by the Knight First Amendment Institute at Columbia University and seven Twitter users whose accounts had been blocked.

These claimants cannot view Trumps tweets, reply to them or see the comments thread underneath them. They can view the former reality TV star’s tweets when not logged into Twitter or when logged into a different, unblocked account.

The claimants argued their First Amendment (free speech) rights “have been and will continue to be encumbered and the ability to communicate has been and will be limited because of each individual plaintiff’s personal ownership of a Twitter account that was blocked”.

Buchwald said “we must assume” Trump and the White House’s social media director, Daniel Scavino, who helps run the account, “will remedy the blocking we have held to be unconstitutional”, and suggested the pair mute the president’s critics instead.

The Justice Department has 60 days to appeal the ruling.