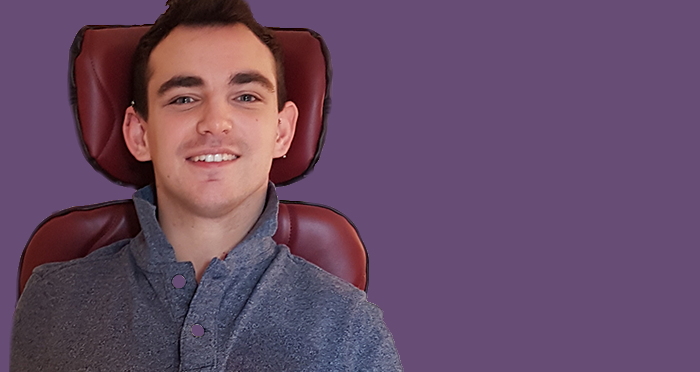 In 1991, a good barrister argued before the House of Lords in R v R that it should be illegal for a man to rape his wife, which at that time was legal. The House of Lords agreed, and the law was changed.

In the same year, Daniel Holt, who has cerebral palsy, was born. Now in his mid-twenties and inspired by cases like R v R, Holt hopes he too can make legal arguments so strong and effective that they change the law for the better.

Over a coffee in Shoreditch, Manchester-born Holt says he’s wanted to be a barrister since he was 14. Before then, he’d decided to become a police officer but, pointing to his wheelchair, he smiles as he says: “I don’t think being a bobby on the beat would really work for me.”

Holt’s time studying law at Queen Mary University of London was “awesome”. The degree was challenging: it took him twice as long to prep for exams and, in his first two years, he sat assessments over eight hours instead of the usual three so he could have breaks. This was “exhausting”.

Holt and his university arranged for him to sit shorter exams in his third year. He did much better, returning for a masters degree in human rights the following year and there scored a first.

He’s hardly let his disability hold him back in his personal life, either. He relocated to London from Manchester and now lives away from family in a flat in the capital. He’s pierced and tattooed, goes to the gym regularly, loves to read, and is involved in multiple charities covering topics such as disability rights and education. He is the founding director of Being Disabled in a Normal Society and a trustee at Disability Rights UK.

Next on Holt’s to-do list is to complete his barrister training.

He’s passed the Bar Aptitude Test and accepted an offer from City Law School to study the Bar Professional Training Course (BPTC), and is looking forward to getting started:

“I’m excited because I’ll be on a journey to become a barrister, and I’ve wanted to do that since I was 14. But I am a little apprehensive about how difficult it’s going to be; people say it’s incredibly hard but I’m looking forward to the challenge.”

During our coffee, Holt mentioned he was hoping to be able to start in September, but that this depended on whether he could secure funding. He was, then, anxiously awaiting news on this from Middle Temple. Happily, yesterday he let me know he secured the Middle Temple Duke and Duchess of Cambridge Award and the Blackstone Exhibition Entrance Award, which will cover the BPTC.

He’s also fresh from a gruelling round of pupillage applications, in which he applied to seven sets. Holt, who has completed two mini-pupillages and has more work experience lined up for this month, did well, getting to the final round at two chambers. One put him on the reserve list; another, unfortunately, rejected him the morning we went for coffee.

The pupillage process is ultra-competitive and can be difficult for anyone to navigate. It’s even more frustrating for Holt, who has to try to prove to chambers that he, physically, can advocate effectively. He knows he can, he says:

“I’m well aware of what my impairments are and the way they affect me with mobility and communication, but I am more than confident that I can be a barrister. I really value the way you put an argument together and I can communicate well enough to be able to share that with an audience.”

Holt is working on his communication skills, giving presentations to schoolchildren and others as part of his commitment to various charities, and he also mooted at university. He’s “very confident” he’ll secure a pupillage at some point in the future.

But he knows the hard work won’t stop there. Not only because Holt wants to be the best barrister he can and one day become a QC (“or a KC!”), but also he hopes to be part of the move towards a more inclusive and diverse legal profession.

A good step, he says, would be for the profession to loosen up its ‘work, work, work’ culture. He tells me:

“The profession needs to recognise that it can change how its lawyers work. You absolutely can change this. Everything now is the way it is because we made it that way; when you’re prepared to change the way you’re run, you become a better profession for many different people, including non-disabled, middle-class white men.”

It’s all in the attitude, and I think it’s safe to say Holt has a great one.

Sign up to the Legal Cheek Hub
Diversity Students