One of the country’s leading barristers has pulled out of an online auction in aid of a social mobility charity after realising that selling work experience to the highest bidder was a strange way of encouraging social mobility, Legal Cheek can reveal.

Other lawyers involved appear to be sticking with the controversial scheme despite Blackstone Chambers ace Sir James Eadie QC — who was knighted on Saturday — bailing.

All proceeds from the auction go to Ufton Court Educational Trust (UCET), a charity which helps raise the aspirations of children from disadvantaged backgrounds. The bidding on a week’s worth of work experience with Eadie had reached a hefty £300 before the ad disappeared from the auction website. Luckily, we’ve got the screenshots. 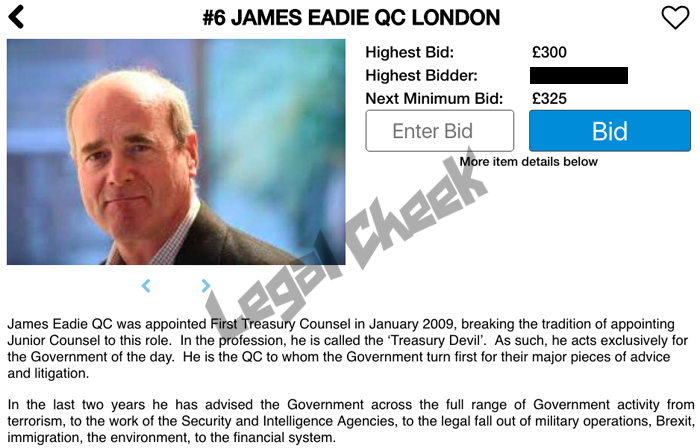 The highest bidder, according to the ad, would have had the opportunity to work alongside the top silk in chambers, read case papers and visit court.

Although far from the only lawyer to offer work experience as part of the fundraising drive, Eadie isn’t just any old QC. As First Treasury Counsel, he’s the government’s barrister of choice when big courtroom battles such as the Gina Miller case heat up.

A spokesperson for Blackstone Chambers told us:

“This was a well-intentioned offer made by James Eadie QC to support a local charity, the Ufton Court Educational Trust, which aims to raise aspirations and achievements of all children and in particular those from disadvantaged backgrounds. James nonetheless now recognises the offer does not fit with a commitment to equal opportunities and to encourage social mobility and as such has been withdrawn. He will instead be making a personal donation to the charity.

Blackstone Chambers is a strong advocate of social mobility and is involved in various CSR programmes; in recent years it has worked with organisations such as Lawyers in Schools, the Guy Fox Project, the Social Mobility Foundation and others.”

Littleton Chambers‘ Timothy Higginson, a commercial and chancery specialist, is still offering a week-long placement. You can, as things stand, snap him up for £200. Littleton Chambers declined to comment. 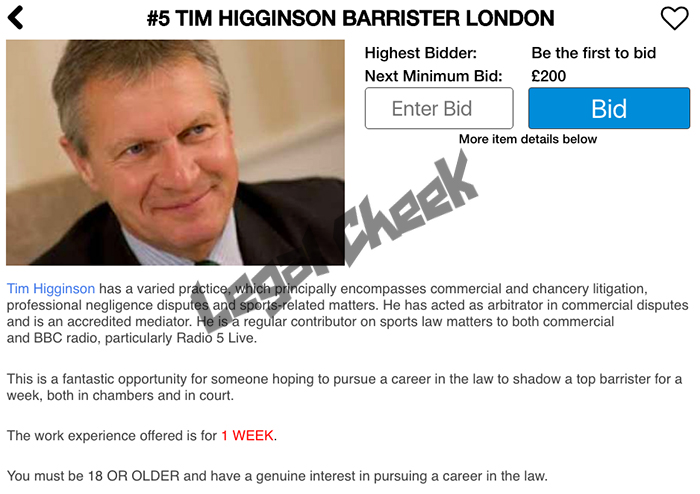 Law firms also feature on the auction page. South West-based outfit Trethowans is listed as offering a week-long placement to the highest bidder. Field Seymour Parkes, a full-service firm in Reading, is listed as doing the same. Again, all cash raised goes to UCET. Legal Cheek asked both firms for comment but neither had responded by time of publication.

A spokeswoman from UCET told us:

“The work experience auction is a straight forward fundraising event, 100% of profits will be used internally by the charity to support our charitable objects. Our aims at Ufton Adventure are simple, to raise the aspiration and attainment of disadvantaged children through programmes of repeated outdoor education. Successful bidders will not only be helping their own children, they will be part of Ufton’s story, helping less advantaged children to succeed in life as well.”

Earlier this year, commercial outfit Hill Dickinson withdrew a work experience placement it had donated to a charity auction, describing the auction lot as “a well-intentioned attempt by a partner to raise funds for a worthy charity which had not been thought through”. Freshfields and Allen & Overy performed similar U-turns in 2016.

“On reflection we appreciate that our participation in this particular fund raising initiative by Ufton could be misinterpreted and as a result we have withdrawn from participation in the auction but in order to ensure that Ufton Court Educational Trust and in particular the disadvantaged children that it supports do not lose out from our withdrawal we are making a donation direct to the charity.”