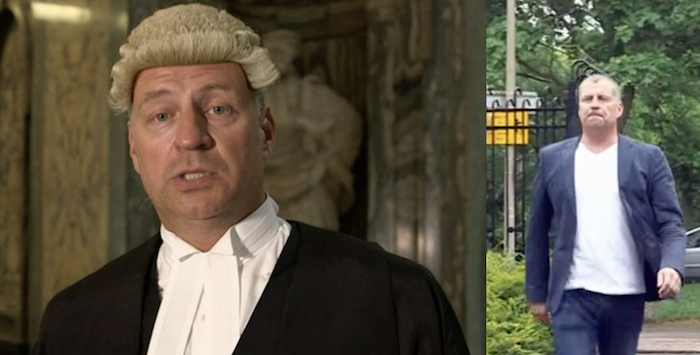 In a punchy and very personal film called Raising the Bar, Serjeants’ Inn barrister Chris Daw QC has called for more mentoring and inspirational talks in schools by the legal profession to combat the number of pupils with “no aspirations or ambitions whatsoever”.

“For me the barriers to the profession start at an early age: school-age kids without a decent education and without supportive parents are giving up. They don’t — they can’t — see themselves as being professionals,” he told Legal Cheek in a follow-up interview this morning.

Daw, who specialises in crime and fraud, argues that “mentoring is one way to replace the lack of parental input in kids’ lives”, and talks in schools from professionals will combat the celebrity-aspiration issue.

The short film, which has had more than 16,000 views on LinkedIn mostly by lawyers, was featured in last week’s episode of BBC1’s magazine programme, The One Show. In it, Daw tells his story from mediocre state comprehensive in Milton Keynes to top-of-his-profession criminal barrister at the Old Bailey.

He kicks off: “Most people think that to be a specialist barrister you have to be born with a silver spoon in your mouth. That was not the case for me.” Daw had, he explains, “an ordinary upbringing, my dad worked on building sites seven days a week.” But a fortuitous careers questionnaire that he filled in suggested he think about being a barrister or an actor. The seed had been planted and was then nurtured by him “spending hours and hours” sitting in crown courts watching jury trials.

Daw was inspired to apply to Manchester University to read law and studied for the bar at the Inns of Court in London. Taking silk in 2013, Daw has in his career has represented a whole range of clients, from notorious drug barons through to footballer John Terry (in his racism charge) and, currently, the retired police chief superintendent during the Hillsborough disaster.

The film has been a huge hit online, prompting a virtual standing ovation from a number of lawyers on LinkedIn as well as sparking a debate about the barriers to social mobility in legal and how best to help the next generation overcome them. One legal counsel disagreed with Daw’s focus on aspirations, arguing that it is barriers to entry that is key here. He writes: “We need [to] go further than giving kids career aspirations. They should have tangible career opportunities. For that, there needs to be systemic change. Without [it], what’s the point of aspiring to it?”

But Daw is passionate in the belief, a belief that he tries to get across to pupils at his alma mater secondary school in his film, that “anyone from anywhere can do anything.” He says in his talk:

“Think about what you want to do, set the limit as high as you like: the only person who sets limits is you.”

Or as he puts it to Legal Cheek: “I went into advocacy believing that it was the best job in the world and I still believe it 25 years later. I am living proof that if you have that level of passion and enthusiasm for something, and commit 100% to it every day, then you will make it.”

Barristers interested in boosting access to the bar can register with the Bar Council’s Barristers in Schools scheme.