O’Shea, 24, had six hours to kill at the airport while waiting to board a flight so took to his Instagram Story on Monday to do a quick Q&A with his mega 1.3 million following.

Among the many questions O’Shea, who graduated from Limerick University in 2017, received, was “which law [do] you want to do in the future?” by an anonymous follower. A bespectacled O’Shea responded: “Would like to specialise in Family law ?.” 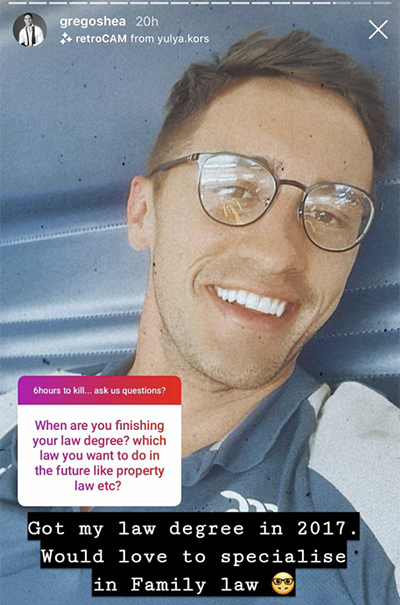 Sadly, no follow-up question as to why the reality star and pro rugby player has set his sights on family law was asked nor answered.

It would appear O’Shea has remained ‘loyal’ to his lawyer dream. His head hasn’t been turned by the post-Island influencer lifestyle of nightclub appearances and multimillion-pound sponsorship deals, and during an appearance on ITV’s Loose Women this summer, he said he still wanted to qualify as a solicitor.

Despite being in the Spanish villa for only two weeks, latecomer O’Shea managed to woo original Islander Amber Gill and win the show despite unfavourable odds.

The duo have since split and last week we revealed the Irishman is rumoured to be dating a fellow law grad. Emma Canning, 22, graduated from Strathclyde University last year and, like O’Shea, is a professional athlete.

Love Island is set to return to screens next month for a winter series in sunny Cape Town, South Africa.