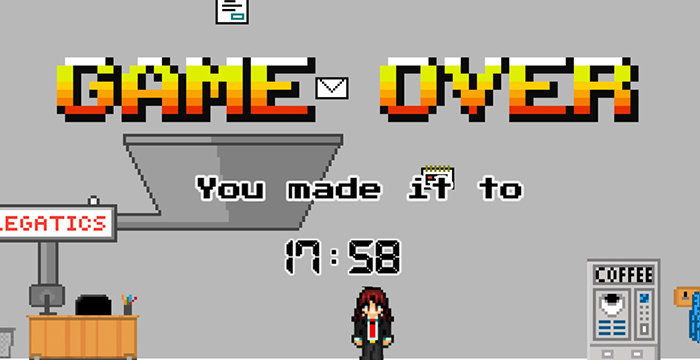 Barclays has cut ties with a new online game that sees users play the role of an overworked City lawyer.

The ‘Capacity’ game, produced by London-based tech firm Legatics, sees players take up the role of a lawyer who, at 5pm (urgh!), is informed by their supervisor that a new matter has just come in from an “important client”.

Agreeing to help out, and with dinner plans presumably cancelled, the lawyer is tasked with collecting as many contracts as possible before they hit the office floor. Users are also encouraged to keep their lawyer “topped up with coffee” and be on the lookout for the ‘Legatics star’ which, if acquired, launches a funnel system, enabling more contracts to be easily collected.

The game, until recently, made two references to the banking giant: one which explained how the game was produced in “association” with Barclays, and another which revealed that the “important client” was in fact Barclays.

Both namechecks have now been removed from the 8-bit-style game at the bank’s request, a spokesperson for Barclays confirmed, after the website RollOnFriday reached out for comment. A line challenging users to “see how late in the evening you can stay on top of your work” has also been scrubbed from the game.

A spokesperson for Legatics said: “Legatics produced ‘Capacity’ in order to provide a light-hearted look at the problem of lawyers working late in the office. The game was made by the Legatics team in connection with the company’s association with Barclays at the annual Legal Geek conference.”

They continued: “Legatics passionately believes in lawyers working more reasonable hours and our software significantly reduces the time lawyers spend on their legal transactions. Legatics has a great working relationship with Barclays, and therefore when Barclays expressed concern that the game could have been misinterpreted, we were happy to remove their association.”

You can view the full list of firms’ average arrive and leave time on our Firms Most List — click through and then search ‘Earliest arrival time’ or ‘Latest leave time’.