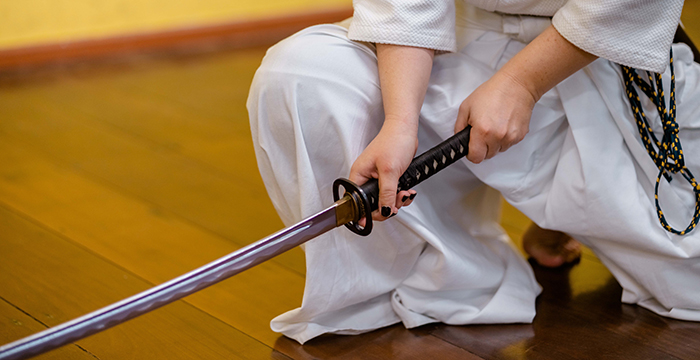 A man embroiled in a bitter court battle with his ex-wife has rather bizarrely requested he be allowed to challenge her in a trial by combat.

David Ostrom, 40, from Paola in Kansas, Miami, claimed in court documents that his ex-wife Bridgette Ostrom, 38, of Shelby County, Iowa, and her divorce lawyer, Matthew Hudson, had “destroyed [him] legally” which rendered him wanting to confront the duo “on the field of battle where [he] will rend their souls from their corporal (sic) bodies”. The couple’s ongoing legal dispute concerns property tax and visitation rights.

Mr Ostrom asked Iowa District Court in Shelby County to give him 12 weeks lead time to find or forge Japanese samurai swords. “I think I’ve met Mr Hudson’s absurdity with my own absurdity,” he was reported to have said, adding that his former wife could choose Hudson to act as her champion.

And while he admitted he has no experience with sword play, Mr Ostrom wielded the argument that the judge had the power to let the parties “resolve our disputes on the field of battle, legally” since trial by combat “has never been explicitly banned or restricted as a right in [the] United States”, and was used “as recently as 1818 in [a] British court”.

Hudson resisted the strange request, arguing that because a duel could end in death, “such ramifications likely outweigh those of property tax and custody issues”.

Judge Craig Dreismeier has not yet ruled on either party’s motions, citing irregularities between the two put forward. “Until the proper procedural steps to initiate a court proceeding are followed, this court will take no further action concerning any motion, objection or petition filed by either party at this time,” he said.

Junior lawyer event: How to build a career at a US law firm in London, with lawyers from Cleary Gottlieb, Kirkland & Ellis, Shearman & Sterling and Skadden — this Thursday evening: REGISTER TO ATTEND
divorce Judges US

This is one of the earliest articles on Legal Cheek:

What do you mean “Honestly what’s happening to this website.”?!

It has always provided a mix of legal news. Stop moaning and go to The Lawyer if you want dry, boring, City updates.

Yes, I would far rather read an update on NQ salaries at White & Case than this.

This website has always been dog shite. I just come for the comments

Why are people moaning? This is absolutely amazing. Trial by combat, backed by a recent 1818 precedent, should be considered as a further — exciting — form of ADR.

What a fascinating form of ADR. And, the 1818 precedent should hold water, following the example of Bercow’s dredging from the depths Erskine May principles from 1604.

I wonder if this could be a new way of combating the SDT? your life is ruined if you lose anyway, why not make it by combat?

What an absolute weapon.

I find it difficult to believe that anyone would want to divorce this chap. He sounds very reasonable and he must be a real joy to live with.