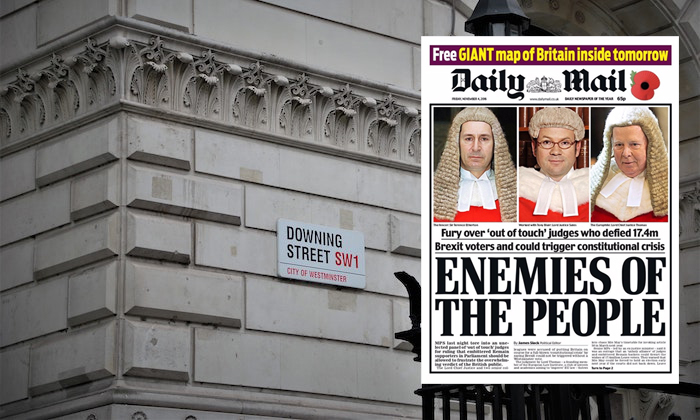 The former political editor of the Daily Mail who wrote the article with the infamous ‘Enemies of the People’ headline is set to become Boris Johnson’s new director of communications.

James Slack is said to be taking over from Lee Cain, No. 10’s former communications chief, who resigned last night amid reports of internal tensions in Downing Street.

Cain resigned despite revealing in a statement last night that he had been asked to serve as the PM’s chief of staff. The promotion appears to have been contested by ministers and advisors, including BoJo’s fiancée, Carrie Symonds, the former Tory party head of comms, according to multiple media sources.

Cain, a former media officer for Slater and Gordon, will leave the post at the end of the year, after which he will be replaced by Slack, the PM’s official spokesman.

Slack was the political editor for the Daily Mail before moving to work for the Tory government in 2017. He authored the article with the provocative ‘Enemies of the People’ headline which appeared on the front-page of the newspaper in 2016.

The Secret Barrister flagged the connection on Twitter last night. Several journalists were quick to point out that news reporters rarely write their own headlines, which are typically the domain of higher-ups.

The Daily Mail headline attacked three judges, Lord Chief Justice Thomas, Sir Terence Etherton and Lord Justice Sales, who were involved in the Brexit High Court challenge. It attracted widespread criticism at the time, with barristers and solicitors jumping to the judiciary’s defence, and slamming Liz Truss, the then Lord Chancellor, for failing to adequately defend the judges.

The newspaper’s former editor, Paul Dacre, went on to defend the headline, telling journalists at a conference in 2018 that “the point needed to be made”.