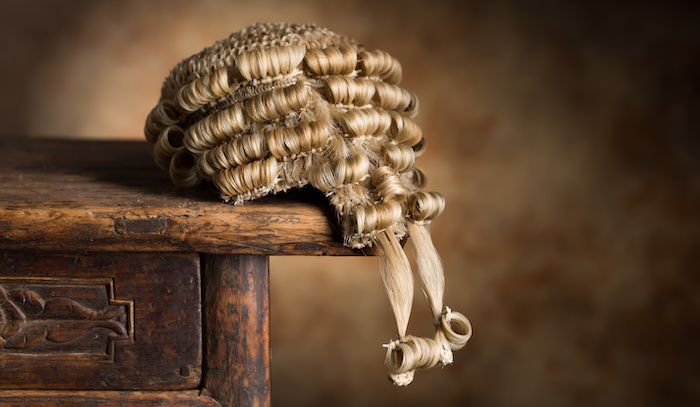 The costumes worn by lawyers and judges in the criminal courts have been archaic and outdated for as long as anyone can remember.

But according to the Lord Chief Justice, wigs aren’t likely to be scrapped any time soon.

Lord Burnett of Maldon made the case for the horsehair headgear in a talk last week — arguing that they help to anonymise judges passing sentence.

Judges adopted wigs, along with the rest of polite society at the time, during the reign of Charles II (1660-1685). But while the rest of the world gradually dropped the fashion, denizens of the legal world kept their rugs firmly in place.

Burnett’s predecessor Lord Phillips dispensed with wigs in the civil and family courts in 2008, but Crown Court and Court of Appeal (Criminal Division) judges still wear them.

Speaking to the Society of Editors on 19 November, Burnett was asked whether it was time to finally ditch the costume altogether — but came down firmly on the side of tradition.

“It’s interesting that whenever opinion is canvassed on this, particularly opinion canvassed outside the legal profession, people quite like them,” Burnett said. “I think they like them because they lend a dignity and solemnity to the proceedings.”

“I don’t think one should underestimate the importance of the nature of criminal proceedings, where the judicial arm of the state is determining guilt or innocence and then depriving people of liberty sometimes for very long periods. It’s a very solemn thing and it should never in my view be done casually, so that’s really why it hasn’t changed and for the moment the preponderance of view is that it’s best left as it is.”

And, he said, there’s a practical reason wigs are good — as a form of judicial disguise. Burnett recalled his own experience as a criminal judge:

“When I was a recorder — that’s a part-time fee-paid judge sitting in the Crown Court for a few weeks a year — I sentenced somebody at Snaresbrook Crown Court. I didn’t put him in prison as it happens, but I sentenced him, and he and I both travelled on the same Tube away from court. He sat opposite me and he didn’t have a clue who I was.”

That, the 62-year-old reckons, is an important feature of wigs for judges and barristers alike: “that it anonymises them. It takes away their personality from the function that they’re performing”.

So would he ever do a Phillips on the last bastion of cranial tradition? Burnett concluded: “Straight answer to your question: will they never go? Of course I can’t say that, but in the short-term, I think not”.