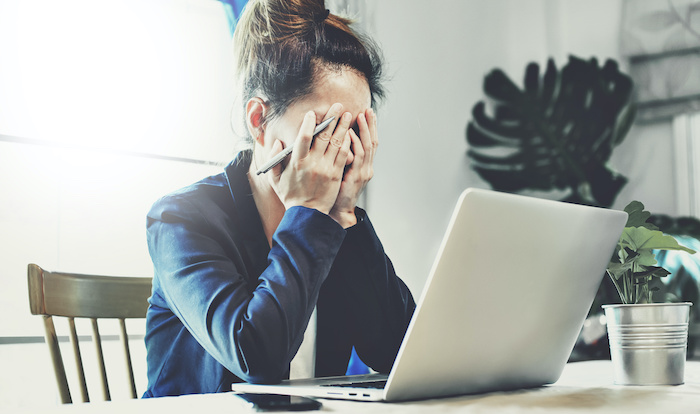 Trainee solicitors are fed up with remote-working and the lack of support they receive from seniors.

Bouts of exhaustion and feelings of isolation and frustration appear to be rife at the junior end of the solicitor profession with many longing for a return to the office.

“Out of sight, out of mind is truer than ever,” said one trainee. “The supervision and learning experience has fallen off a cliff … I’ve really felt my mental health slipping over the last few months,” added another. “A lot of the time it feels like I’m a robot that processes and churns out tasks, day and night.”

These were some of the sentiments that played out in the comments section of a news story we published last week about the effect of lockdown on lawyers’ mental health. It seems cracks are beginning to show in the WFH model, particularly among trainee and junior lawyers.

“I don’t think senior people quite grasp how awful it is,” wrote one Legal Cheek reader. “Most trainees are in house shares or live alone in small apartments. The learning by osmosis and being able to sit round the partners table and listen in on calls without being announced: gone. The little walks, coffee breaks and lunchtime chats with your cohort: gone. The ability to bond with your new colleagues and get used to living in London: gone.”

The rest of the comments similarly expose the reality for rookies living from work, and make for eye-opening reading. “All the old farts who bang on about WFH being ‘the future’ need to read this,” wrote one commenter.

And so it seems a generational divide is brewing: on the one hand there are trainees living in house shares or small apartments (spare a thought for the trainee “working 15 hour days at a camping table at the foot of my bed” or the one grappling with “sh*t technology”) and, on the other, “the people over 35 with families, established careers, and nice big houses in the commuter belt that are absolutely loving WFH”.

“WFH full-time (or just for most of the time) is not a level playing field between junior and senior fee-earners in the same way a shared office space is,” wrote one trainee below the bottom-line. “Partners and senior staff desperately need to grasp this, or communicate better that they understand.”

The WFH trainee who has “silently sacrificed so much” is being made to feel like a “resource”, according to one commenter. They bear the brunt of “screen/computer heavy work of making bibles”, and in one instance, “one trainee was told by their supervisor that he hadn’t got in touch for a few days because he ‘had sort of forgotten about him'”.

The experience is further compounded by the “expectation that [trainees] can work whenever” and “no one knows/appreciates/gives time in lieu” as they would do in the office.

“[Working from home] I feel constantly on edge, as if I step away from my computer for anymore than a few minutes it will be assumed that I’m just bunking off and watching Netflix, rather than doing a legitimate workday activity like going for a walk or getting lunch,” said one trainee, laying bare the extent to which the work from home situation is taking its toll on trainees.

This narrative contrasts somewhat with our findings in this year’s Legal Cheek Trainee and Junior Lawyer Survey. Thousands of juniors that were surveyed towards the start of the coronavirus pandemic reported an overwhelmingly positive response to the move to working from home.

“I’ve probably had more catch-ups and interactions than I would have had in the office,” said one anonymous survey respondent, whilst another trainee reeled off a list of the virtual socials such as “quizzes, escape rooms, cook-a-longs, yoga classes” they had the privilege of taking part in. “My team have a weekly meeting where we all discuss our weeks and how we are feeling,” they added.

With a return to office-based working likely in “a few short months”, according to Prime Minister Boris Johnson, it remains to be seen whether the situation for trainees will improve.