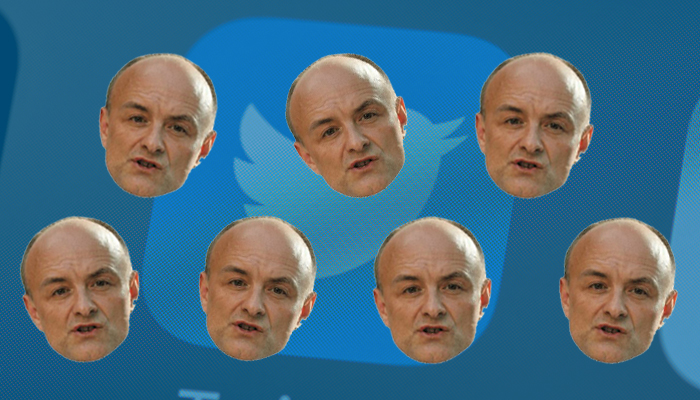 Dominic Cummings has lashed out at “charlatan campaigning lawyers”, including some of legal Twitter’s best-known commentators.

He included a screenshot of a Green tweet from two and a half years ago saying that if parliament wouldn’t vote for a Brexit deal or for no deal, the only other possible outcome was no Brexit.

If tempted to believe charlatan campaigning lawyers on Twitter, NB this is good example of their 'expert' analysis, from 7/19 they told Remain supporters 'VL idiots are doomed, genius Grieve will beat them'. Simor, Peers, kimono Jolyon, DAG… They're *really* bad at politics pic.twitter.com/ZAISi4A7Fd

“Genius Grieve” is Dominic Grieve, the former MP, Attorney General and leading player in the 2019 parliamentary manoeuvres over Brexit that ended with Cummings’ and the Conservatives’ victory in December that year.

Some of those targeted have also dipped their toes in the water of electoral politics. Simor stood for Change UK in the 2019 European Parliament elections, while Maugham once floated the idea of a pro-EU outfit called “Spring The Party”.

In a blog post responding to Cummings’s tweet, Peers called the views attributed to the group an “unsubstantiated assertion” and noted that, as a lawyer, “judging me on whether I’m ‘bad’ at politics is as relevant as judging me for my skills at pole vaulting or astral projection”.

Simor tweeted: “Is it defamatory to call an honest lawyer a charlatan?”

Meanwhile, Green posted a thread saying “at the time I posted the March 2019 tweet, that was my view based on the evidence available”.

Cummings’ beef with lawyers extends beyond Brexit rows. In other recent tweets, he has charged that “rancid lawyers at the bar line their pockets” with dodgy Russian money and said that “if you’re a serious government lawyers are hired help, you don’t let the lawyers run things”.

How soon before they start claiming they feel ‘unsafe’ and ‘unable to leave the house’ because Cummings dared to criticise them?

Look – I know this is gonna be a controversial one, but I think that DC is one of the cleverest people to have worked in government in the last 50 years.

Disagree with him on the finer aspects of policy (as well as many other things), but I do believe he sees the problems in how the country is run (bureaucratic, too slow, evasive to change etc) and was, before leaving No.10, wholly committed to improving it.

Hopefully he’ll be back in a position of power before too long.

As unsavoury as I find Dominic Cummings at times, when he says that these particular individuals are “really bad at politics”, I think ‘fair enough’.

DAG asserted in that tweet that the only ultimate outcome left for Brexit was revocation. With respect, it wasn’t.

A general election that broke the deadlock (by creating a new Parliament) was always a possible and foreseeable outcome – and, of course, was exactly what did happen.

The problem with this analysis (32 likes!) – is that I do not support UK membership of the EU

As this is the case your final put-down is not correct.

He is right about one thing, Government lawyers are treated as hired help, in that their advice is routinely requested and ignored…. Then the ministers expect help with the inevitable litigation as they went against advice. Its a bit of a rough lot to be asked to defend a policy before a judge after provising leghty miniaterial briefs outlining the proposal was indefensable… Talk about pissing tax payer Money away.

The real charlatan is DC who thinks he knows best. If lawyers were in control they would have been slightly more considered, perhaps a little slower, but they’d have made far less of a hash of things.

No, they’d have been awful. The tweeting lawyers haven’t a clue how the average man thinks. At least Cummings pretends to.

Why has no one said/sung….?

It’s a jolly holiday with Jolyon…

He thinks he is blooming ordi-nary…

But really he’s just up his own….

"Sent from my iPhone"

“Twitter royalty” – If I wanted to start diving into this phrase and start explaining what is wrong with it, I would not even know where to begin.

I thought HL lawyers abused buzz words way too much, but this is another level.

That is where you are.

He’s right that they are really bad at politics.

You can smell their smugness from 100 miles away, and they don’t speak beyond their supposedly superior echo chamber.

They are all as bad as each other. Snobbery masquerading as social justice. And yes I’m even looking at you, modest QCs constantly tweeting about their holiday homes in a faux modest manner.

The worst for me were the QCs fundraising for Syria/Yemen simply by posting links to charities already doing the heavy lifting. Couldn’t they offer some pro bono help or use advocacy to petition the government to stop arms trading?

They didn’t respond on Twitter when I asked how many Yemenis or Syrians they worked with in chambers.

DAG stayed up all night dreaming of his reply to Cummings. Cummings living rent free.

15% drop in services exports to the EU reported today. Hurrah, we are getting poorer together.

I have never held myself out to be other than a legal commentator – and I do not ask anyone to defer to me.

What I do try to do is explain legal issues as clearly as I can to the public, so as to promote the public understanding of law.

That may be an ‘utterly ridiculous’ thing to try to do – and this sort of anonymous abuse makes me think it is (32 likes!) – but I shall try to do it all the same.