‘This has won the internet for the day’ 🤣 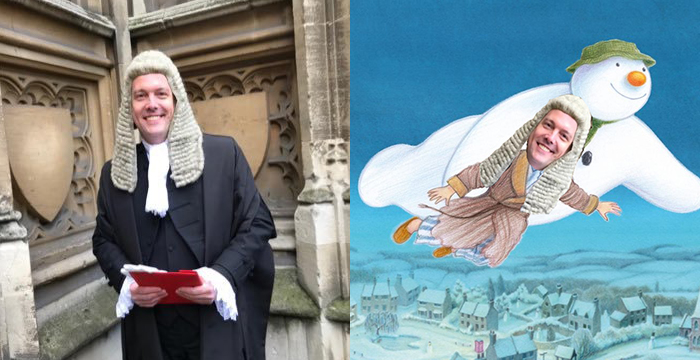 A top QC’s request on Twitter to make his profile picture more “Christmassy” has produced some seriously funny responses.

“I’m about to ask a very stupid question,” wrote David Durose QC, who goes by @DavidMuttering on Twitter. “Can someone with some photoshop skills make my profile photo Christmassy,” he asked, adding: “I’m going to regret this.”

I'm about to ask a very stupid question.

Can someone with some photoshop skills make my profile photo Christmassy.

I'm going to regret this. pic.twitter.com/QztBRYl6nb

In less than 24 hours since it was posted, the Furnival Chambers silk’s daring tweet garnered thousands of responses and nearly 10,000 likes at the time of publication. Some social media users went all out producing over the top festive scenes, while others were a little more understated in their approach. Here are the very best:

Did it need a bit more? 🙂 pic.twitter.com/LfqAtQy13m

I can't to photoshop but I'm a demon with Microsoft Paint pic.twitter.com/QV5f24q2BQ

Look at you all excited with your little red Christmas book 😍 pic.twitter.com/Uz2g8QYe5B

The best I could manage in a hurry! pic.twitter.com/9eG44sp3SK

Not a profile pic but festive! pic.twitter.com/7TDWNnS6vY

Having received so many humorous submissions, Durose tweeted:

“People are just brilliant. Thank you, Twitter. The response to this has been amazing — and I’m delighted that it’s cheered so many people. I now have the joyously onerous task of choosing a new profile pic.”