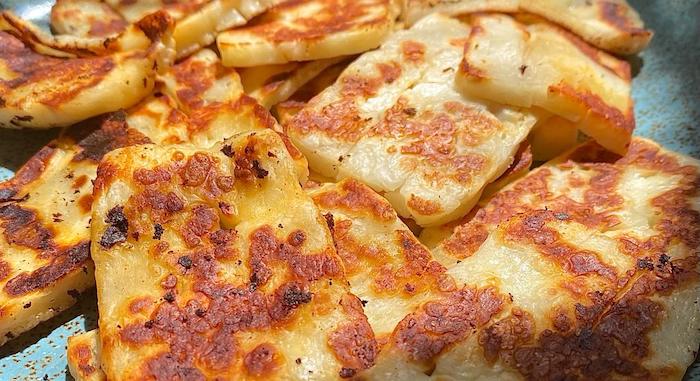 In 2018, the High Court made a decision about halloumi that was hard for Cyprus to swallow. “I am reading through the case over and over again and I cannot comprehend how such a serious mistake could have taken place,” exclaimed Yiorgos Lakkotrypis, minister of commerce, industry and tourism for the Republic of Cyprus.

A bureaucratic blunder saw applications to invalidate or revoke the Cypriot government’s 2002 trademark of the word ‘Halloumi’ filed by the British halloumi importer and retailer John & Pascalis upheld by the court, after the Cypriot government did not provide the necessary paperwork within the two-month deadline.

But why did this ruling mark, as opposition parties termed it, “another black page in the history of Cypriot halloumi”?

Halloumi is the proverbial big cheese in Cyprus. Exports of the island’s ‘white gold’ were worth €270 million (£229 million) in 2020, €115 million of which were sold to British importers, making it one of nation’s most valuable exports. It is forecast to nearly double in value by 2027.

For this reason, the government and The Foundation for the Protection of the Traditional Cheese of Cyprus named Halloumi (hereafter referred to as the Halloumi Foundation), an organisation that aims to protect and promote Cypriot halloumi, have fiercely battled for any IP rights they can obtain to protect this interest, especially in the UK.

The Ministry of Commerce has registered trademarks for the word ‘Halloumi’ in Canada, Jordan and the UK (where it was successfully re-registered in 2020), whilst the Halloumi Foundation holds a collective trademark registered by European Union Intellectual Property Office (EUIPO). Trademarks protect the use of the term ‘Halloumi’, which is used by its holders to ensure competitors making their products outside Cyprus cannot call their cheeses ‘Halloumi’. The aim of the collective trademark is a little different. This mark indicates that the cheese originates from members of the Halloumi Foundation.

These marks have proved somewhat limited and ineffective with a series of defeats in the European Courts related to challenging the marks ‘GRILLOUMI’ and ‘BBQLOUMI’, although the collective mark has been more successful in English courts. In short, ‘Halloumi’ is not really functioning as an effective trademark because of the generic use of the term. The fact that the Turkish equivalent term Hellim may be used offers a further loophole.

However, a better form of IP protection exists. Launched in 1996, the EU’s developed of several copyright protection schemes for ‘origin foods’. There are two types: protected designation of origin (PDO) and protected geographical indication (PGI). These schemes limit the use of a certified product’s name to a group of regional producers. This neatly achieves Cyprus’s objectives, providing a tighter grasp on its brand owing to its historical ties with the cheese rather than leaving it to struggle with the genericness problem and other vulnerabilities trademarks presented.

But there’s a catch. Once obtained, a product must be produced in accordance with its traditional recipe and ingredients. Producers who do not comply lose the label. A comparable situation with Feta cheese also underlined that historical connection between the place and the product (evidence of the products significance in its laws, press, traditional practices and so on), as well as current domestic market size and national legal status, is also vital in order to avoid the same risk of genericness we have observed in trademarks.

After its first failed attempt at registration in 2009, Cyprus’s halloumi cheese was eventually granted PDO status on 12 April 2021. These laws sound great, right? But to conclude so, to my mind, misses the bigger picture. It is clear that the EU’s origin foods system is, to a certain extent, artificial and hypocritical.

It is artificial because it fosters the idea that certain foods have a historical authenticity. As Gisela Welz points out, “taking the perspective of social anthropology, one has to contend that halloumi, or hellim, is a cheese that does not belong to any one ethnic group or nation alone”. Even discounting the issue of the academic truth that Halloumi is Cyprus’s cultural property, the idea that halloumi is traditional does not really stand up. Back in the 1960s, the traditional notion of halloumi was more realistic — it was primarily produced by agrarian households for subsistence. Since the effects of globalisation created a market for niche authentic products that have been able to go mainstream, the dairy industry in Cyprus has transformed halloumi production from non-commercial agrarian households to a handful of mass-market producers.

This is the root of the current problem the island is experiencing with its PDO. Halloumi was traditionally made by either goat’s milk or a mixture of sheep and goat’s milk. Since the British first brought dairy cows on a large scale to Cyprus in the 1960s, cow’s milk started to be used to cut costs. However, in order to be labelled as a PDO protected product, the halloumi must be made from at least 51% sheep and/or goat’s milk. This has caused uproar. Since cow’s milk is cheaper than sheep and goat’s milk, producers have shifted their recipes to predominantly cow’s milk, in some cases as much as 90% cow’s milk. It would appear that Cyprus has tied its own hands by forcing itself to buy into the false notion of traditional and authentic origin foods when, as Welz argues, the product now only has “a resemblance of traditionality”.

Despite this apparent lack of authenticity, recognising IP rights in an ‘origin food’ also involves acknowledging a nation’s claim over a certain food. Accordingly, such claims normally have political ramifications and boost particular nationalist narratives. This has been striking in the case of halloumi which has been intertwined with the island’s Greek-Turkish tension. Since the 1974 Turkish invasion of Cyprus, the island has been split by the Green Line with Turkish Cypriots in the north and Greek Cypriots in the south. Following Cyprus’s accession to the EU in 2004, Northern Cyprus suspended EU regulations. Today, Turkey only recognises Northern Cyprus and not the government of the Republic of Cyprus.

PDO status was initially used by Greek Cypriots to have the EU recognise halloumi as exclusively theirs. This was the cause for the failure of the 2009 PDO application. The EU then openly attempted to use the PDO as leverage to aid the reunification process which has made a point of including Turkish Cypriot producers in Northern Cyprus. Although admirable in this atypical case, the EU’s efforts for reunification seem to have made little progress and may even be considered counterproductive. The EU is not the only example of this problem — one can say the same of UNESCO’s Convention for the Safeguarding of Intangible Cultural Heritage.

So, if you happen to have enjoyed or intend on enjoying some grilled halloumi during the heatwave, spare a thought for what these problematic IP laws represent and how they have fostered new tensions on the island where it was produced.

Sign up to the Legal Cheek Newsletter
intellectual property Solicitors

Always a joy reading Will’s articles – especially since this combines my twin interests in IP and Halloumi!

Nice work if you can get it!!

Cornish pasties fall into similar territory I believe…let’s prepare for some nice legal food wars. Should be tasty for lawyers yum yum 🎉🥳

Tell the firms to announce more of the money thing they’ve been doing.

Yes I am going to sleep over this

Trade mark is two words in British English (and law).

Partner: Hi Will – please could you summarise, in one page, the risk exposure to our client.
Will: Well, in the year 1563 AD…