Some 18,927 students graduated with law degrees last year, while the number of solicitors on the roll also hit unprecedented levels 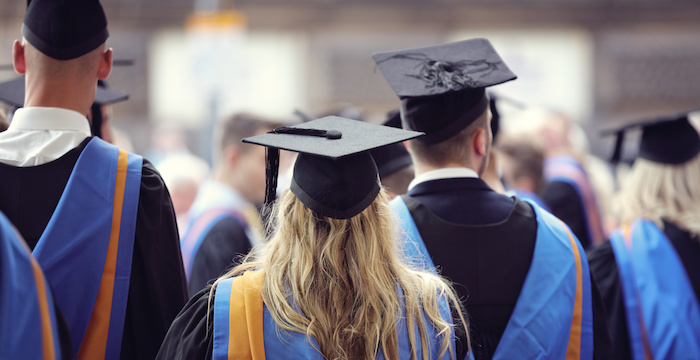 Record numbers of students graduated with law degrees last year, while the number of solicitors on the roll also reached an all-time high, new statistics released this week by the Law Society have shown.

The number of students graduating with first degrees in law from universities in England and Wales in 2021 was the highest on record at 18,927. The Law Society’s Annual Statistics Report (ASR) 2021 shows over a quarter (27%) of these graduates achieved a first and 55% a 2.1 degree.

Meanwhile, a record number has also been reported for solicitors on the roll reaching 209,215, an increase of 3% from the year before.

The report, which has been compiled for over 30 years to show how the size and structure of the solicitors’ profession has evolved, found the number of trainee registrations dropped by 2% to 5,495 — the lowest in the past five years.

However, the number of those admitted to the roll was the highest on record over the past decade, reaching 6,981.

Elsewhere, the representation of Black, Asian and minority ethnic (BAME) backgrounds continued to grow, reaching 18% of those with known ethnicity.

Roughly a quarter of solicitors with practising certificates work in-house. This figure has steadily increased by 1% on average each year but, as the report states, is “a likely underestimate as some [practising certificate] holders are not officially recorded as working in-house”.

Law Society president I. Stephanie Boyce, who herself works as an in-house lawyer, said: “[I]t is encouraging to see solicitors employed in-house by organisations, ranging from FTSE and private companies to local authorities now make up a quarter of the profession.”

The ASR provides a snapshot of the profession as at 31 July each year.

I think the legal degree system needs reforming. Too many universities are issuing QLDs. There should either be:
• a set number of universities issuing law degrees, e.g., no more than 25; and/or
• the minimum requirements for progression should increase, e.g. a 1:1 for barristers, and 2:1 for solicitors.

They also need to scrap the GDL in all its forms. Reduce the number of bar course / LPC/SQE etc places each year to make them far more competitive for entry.

The GDL/LPC/SQE act as a nice money making red tape racket though so good luck. Providers employ a lot of people to teach and facilitate government mandated courses that barely resemble private practice.

If you call LLB a waste of time maybe you shouldn’t go into law?
GDL is a JOKE really. Can’t believe GDL from any private legal education provider like ULaw or BPP is equivalent to 3 years of actual uni curriculum in law. There is a problem here.

Yet numerous reputable firms recruit heavily from non-law grads. If really think you need 3 years of academic law to be in private practice you clearly don’t know what it means to be a solicitor.

The fact that E&W can allow university graduates to do a law conversion course without a law degree is, in my humble opinion, the problem. If you aren’t smart enough to get into law school you shouldn’t be allowed to become a lawyer. Increasing supply only makes those who are truly qualified to face unnecessary amount of market competition.

This is part of the reasons the E&W legal fraternity is filled with “lawyers” who have limited knowledge of the law and are good at churning out pro forma rubbish only.

The axiom in your argument that those who do law conversion courses are not smart enough for LLB entry undermines your whole argument as this is an incorrect fact and false correlation – it’s also obvious you’re speaking from little experience.

(i) In the U.S. all those admitted to do the JD first have an undergrad course so the idea that non-law undergrads do not have the skillset which is implied is incorrect;

(ii) LLB modules are quite cerebral but are not comparable to practising law in any capacity. For private practise you need a very general mix of research, grasp of nuances in language, social skills, being able to read people’s faces, c0mMerCiAL aWarEnEsS etc etc;

(iii) At the bar the day-to-day grind is comparable to doing a humanities PhD as opposed to LLB lectures;

(iv) You also have very limited exposure to the legal practise.

Pull up your big boy pants and make a competitive application that beats others.

another student going through the recruitment cycle

I needed to hear that today, cheers!

Can it not be autumn.

There is no such thing as law school. There are universities with law departments.

Are you seriously suggesting that a good first from Oxbridge in a plausible non-law degree, followed by a conversion through the GDL, is of inferior benefit to the legal profession than your average law degree? It doesn’t necessarily follow that it is superior, but it’s a bizarre piece of reasoning to suggest that that is the problem.

Never understood why somebody who aspires to work in law would prefer to study theology at Oxbridge hoping for “a good first” instead of a more useful degree (even if non-law) at any other uni. Of course it makes sense in a society where parents rationally invest in public school education just to increase the probability of an Oxbridge degree.

Bored of a legal career after four years.

Most degrees aren’t vocational. Thankfully a lot of people still do degrees for their inherent academic interest. What a wetter you’d have to be to come out of school aged 18 and think about your degree solely in the context of what you believe will help you best in the workplace.

I didn’t do a theology degree, but I can imagine it would be very interesting, especially if you do then intend to spend the next forty years working in commercial law.

A legal career may become boring even if a law degree does satisfy your inherent academic interest. Imagine if it doesn’t.

Being “smart enough” to get into law school is not difficult when there are so many universities that offer it. Offering non-law Russell Group grads the opportunity to convert is going to give you a much better pool of solicitors than having people with law degrees at universities outside the top 100.

Or you prove you’re smart enough by scoring well in the GDL. I mean if the GDL score for an applicant is low, you aren’t going to secure a pupillage or a training contract.
But why should someone be stopped from studying law at postgraduate level when they achieved a first class degree in a fellow academic subject at undergraduate?

How many TCs are available?

Couldn’t really care less about QLDs, what’s much more worrying is the new route to getting on the roll.

Could Legal Cheek please add a verification mark (maybe a ✔?) for posts from qualified lawyers so I can sort the wheat from the chaff. Doubt it would take too much time to arrange using ‘find a solicitor’ on the law society’s website and a confirmation from your work email address. Upvote if you think this is a good idea.