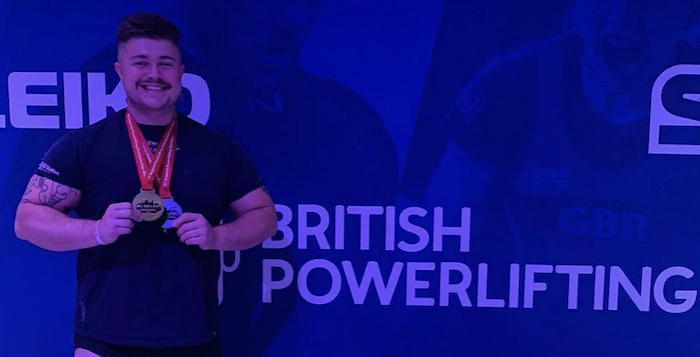 By day, Troy Atkin is a fourth-seat litigation trainee solicitor working for the regional law firm Biscoes. By night, he is an international-level powerlifter with a new mission: bringing a gold medal home for England.

Atkin recently announced that he is heading to New Zealand to represent England at the Powerlifting Commonwealth Games that runs from 27 November to 4 December.

The rookie solicitor first got into powerlifting after watching friends compete and doesn’t shy easily from a challenge. He told Legal Cheek:

“I am probably the most competitive person you will ever meet, and I loved the thought of dedicating my time and energy to a sport that requires absolute commitment.”

Perhaps unsurprisingly then, his legal studies and training contract haven’t held him back. Instead, Atkin has gone from strength to strength, noting that “my lifting has peaked during the height of my TC”. He is currently the reigning English Bench Press Champion for -120kg open men’s category, ranking 3rd in the UK.

Commenting on how he balances his role as a trainee lawyer with a demanding training schedule (four three-hour strength sessions plus 100 miles on his spin bike every week) that enabled him to reach his lifting apex, Atkin says:

“I have a fantastic coach, and a great team, and I am a big believer in making time to achieve your goals. As Arnie [Schwarzenegger] said, ‘there are 24 hours in a day…’.”

“I am also lucky that my firm, Biscoes, allow for me to accommodate my training. They have been very supportive, and always let me prioritise my lifting at the same level as my TC,” he adds.

There’s a lot of lessons Atkin has learned from his weightlifting that has helped him as a lawyer.

“Like law, lifting requires the ability to overcome adversity; the ability to embrace failure as a positive; and the ability to never give up,” he explains. “I always remind myself when things get tough, that champions are made when everyone else stops!”

Indeed, Atkin credits lifting for having “an extremely positive impact” on his career and helping him to develop a mindset that enables him to thrive in tough situations and find his limits.

“The difference between a good lawyer and a fantastic lawyer is how they think, and react to certain situations – things you can only learn from growth, and putting yourself in uncomfortable situations” — something Atkin has done time and again in his ascent in elite lifting.

It’s a reminder about knowing your limits too though. “There is a saying in that the iron never lies, and you can either lift it or you can’t,” says Atkin. “For a litigator, such certainty is extremely rare, but very welcome.”

“I will continue to strive to be the very best lawyer and lifter I am able to be, and hopefully I can bring the gold medal home for England!”

Sign up to the Legal Cheek Newsletter
Biscoes Solicitors

Best of luck to him.

Agreed. You have to be a particularly unimpressive and mediocre tool to think typing the 9.50 is appropriate or remotely humorous.

Bro is jealous. You’ll get your one plate bench soon mate, keep at it!

Lol I saw one of their trainees in my local lambo dealer.

Don’t worry. We all know you are a particularly unimpressive and mediocre tool.

If you are going to be a one trick pony, which is itself a sign of being dull and lacking in wit, you need a much better pony which has a far better trick.

Met Troy on a PSC Course recently which we were doing together for Advocacy. He was a great team member and really enjoyed talking to him about the upcoming Games when I found out about his lifting on a LinkedIn stalk. Thoroughly nice bloke and wish him all the best- I think Biscoes have a good lawyer on their hands.