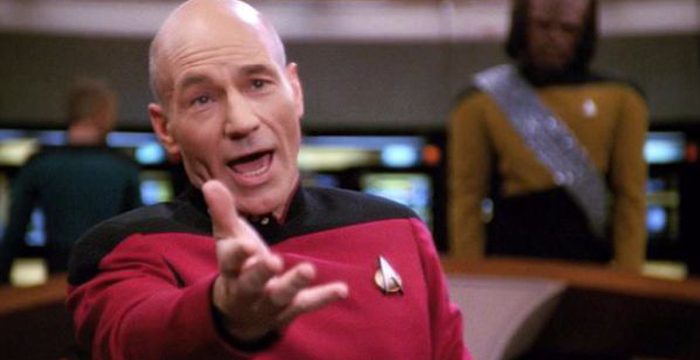 Veteran actor Sir Patrick Stewart is campaigning for a referendum on Theresa May’s Brexit deal, saying that he wants voters to be given a chance to reject the impending divorce arrangements and stay in the EU — as the captain of the Enterprise would have wanted.

The man who brought us Jean-Luc Picard in Star Trek and Professor Charles Xavier in X-Men told the BBC that both sci-fi characters “would have voted Remain”. Stewart later spoke at a London rally, telling supporters of a vote on the deal:

“It is not Charles Xavier standing here in front of you — although I can assure you that if he was, he would have voted Remain. And why? Because unity, common cause, wellbeing of society and debate were paramount to belief of this fictional character.”

The 77-year-old is best known for his classical and Hollywood acting, adorable friendship with Ian McKellen and questionable taste in YouTube videos.

A vote to reject the deal eventually thrashed out in Brussels wouldn’t necessarily have any legal effect. A referendum in the same form as last time would not be any more legally binding than the original.

As the High Court put it in the Gina Miller case: “A referendum on any topic can only be advisory for the lawmakers in Parliament unless very clear language to the contrary in the referendum legislation in question.”

But it could achieve one of two things. It could give MPs a political excuse to vote the deal down and send the government back to the negotiating table.

A new report today by boffins at the influential Institute for Government think tank says that this could work: “If Parliament voted the Government’s deal down without amendment, this could lead to a renegotiation if the Government faced insurmountable political pressure to heed Parliament’s concerns, and the 27 member states of the EU (EU27) were willing to discuss the issues raised by parliamentarians”. It rejects the conventional wisdom that it’s ‘deal or no deal’ — either take what the EU offers, or crash out with no safety net. The Law Society has said that would be “devastating” for the UK legal sector.

Or the government could try to pack the whole thing in. Stewart said yesterday that if his referendum idea worked, “we would simply stay in the [European] Union”.

Most lawyers agree that if all the other EU countries agreed, we could stay (although the chat over the Ferrero Rocher would be pretty awks for a while).

Oh CRINGE Theresa May has got no mates pic.twitter.com/glcLGbPqBU

But there’s been a fierce legal debate about whether Britain can change its mind unilaterally, by just taking back its Article 50 notification of withdrawal. Most British lawyers think that it can, while others disagree.

A case trying to get the European Court of Justice to give a definitive ruling on the issue is currently before the Scottish courts. The judges aren’t that impressed by it so far, though.

Scottish case on whether UK can change its mind about Brexit proceeds to next stage despite court thinking it a load of waffle https://t.co/RrWJDKw6NY pic.twitter.com/Hf73Ch7EXz

Ultimately there’s no magic legal bullet that will stop Brexit. There would need to be a big change in public opinion if the UK were to reverse course. At the moment, that still looks light years away.